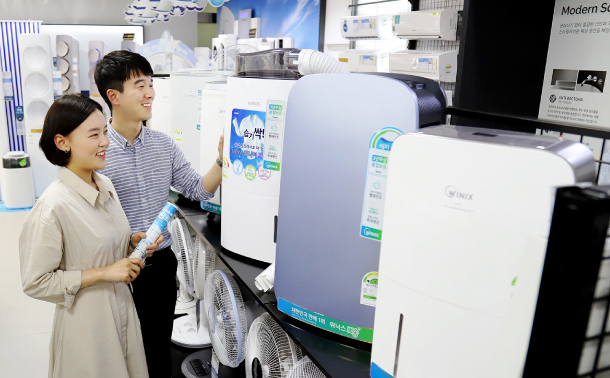 Dehumidifier sales skyrocketed last week thanks to an unusually wet week for this time of the year.

The rain started on May 12 and continued for six days in the following week. Over the week, the word dehumidifier appeared many times as a trending keyword on internet portals.

“As the humid weather continued, we saw a significant rise in customers who came looking for dehumidifiers,” said Choi Doo-hwan, manager of Lotte Hi-Mart’s Daechi branch in southern Seoul.

Sales really spiked between Wednesday and Friday when the rain was concentrated in the Seoul Metropolitan area. Sales rose 415 percent during those three days compared to the previous week.

Demand online was also buoyant. At e-commerce site eNuri.com, dehumidifier sales on Wednesday and Thursday shot up more than seven times compared to the average for the month before Tuesday.

An appliance commonly found in Korean homes, dehumidifiers sales usually start to climb from early summer and peak in July.

Around 40 percent of the country’s annual rainfall is concentrated in a few weeks in the summer.

Dehumidifiers make interiors more comfortable and are useful for preventing mildew from growing on walls. They assist indoor drying of laundry.