[News in focus] Woori shakes up its governance

[News in focus] Woori shakes up its governance 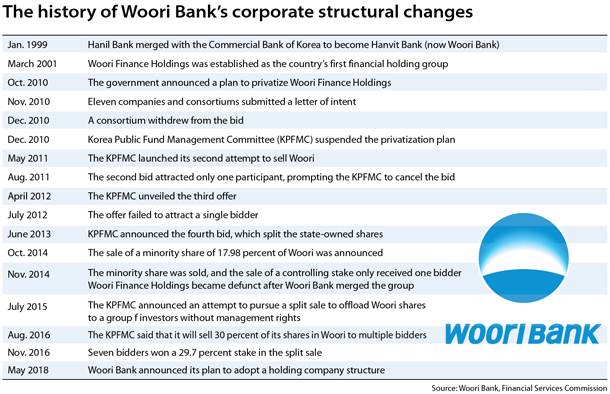 Woori Bank’s plan to adopt a holding company structure will lift its limit on investment, likely boosting its shares prices, which have long been undervalued compared to other banks.

The announcement on Monday marks the bank’s return to an integrated financial service group structure. Woori Finance Holdings closed the book on the country’s first financial holding unit in 2014 to speed along the sale of government-owned stakes.

Analysts said that the change in corporate governance could increase the bank’s maximum stock investment up to around 8 trillion won ($7.5 billion) and will help it with mergers and acquisitions to strengthen Woori’s non-banking sectors, such as asset management.

“Woori Bank is banned from investing more than 20 percent of its capital under the current banking law,” said Kim Do-ha, an analyst at SK Securities. “Now the threshold is set at 4.5 trillion won, but the change in structure will likely add more than 4 trillion won, because a holding unit is entitled to a higher investment limit.”

With its increased investment capacity, Woori will likely be interested in scooping up a brokerage, asset management firm and trust company, Kim said.

Sohn Tae-seung, the CEO of Woori Bank, hinted at the strategy when he was inaugurated last year.

“We will push for different mergers and acquisitions of non-banking financial units, such as an asset management company,” he said.

The bank said on Monday that it hopes to complete the process by early next year, adding that the new governance system will “secure competitiveness as a comprehensive financial group.”

The Financial Services Commission, the country’s top financial regulator, said it would sell the government’s remaining stake in the bank once the transformation is complete. Right now, the government holds 18.4 percent of Woori Bank through the state-owned Korea Deposit Insurance Corporation after it sold a nearly 30 percent stake to multiple bidders last year.

The market welcomed the move on Monday, as Woori Bank’s share price closed at 15,750 won, up 3.62 percent from the previous trading day.

Optimistic investment sentiment is linked to expectations that the shift could push up Woori’s share price, which some say is undervalued.

“Woori Bank’s price-to-book ratio is 0.55, which is lower than the industry average of 0.59,” said Han Jeong-tae, an analyst at Hana Financial Investment.

“It is seen as underrated compared to other banks,” the analyst said.

Price-to-book ratio refers to an evaluation metric designed to compare the current market price of a company’s stock to its value entered in the company’s books. The lower the ratio is, the higher the degree of market undervaluation compared to book value.

Analysts cited the current structure as a factor holding back Woori’s value, because it hampers its efforts to grow its businesses and diversify its portfolio.

In line with the government’s efforts to privatize Woori, its CEO has embarked on an investor relations tour to promote the upcoming sale to potential investors.

Sohn flew to Hong Kong and Singapore on Monday for a four-day trip, and plans to visit Europe in the second half of this year.

The bank reported 589.7 billion won in net profit in the first quarter, which surpassed analysts’ expectations. Still, it relied heavily on its banking business, as its other businesses only accounted for 6.6 percent, or 39.1 billion won, of its net profit.