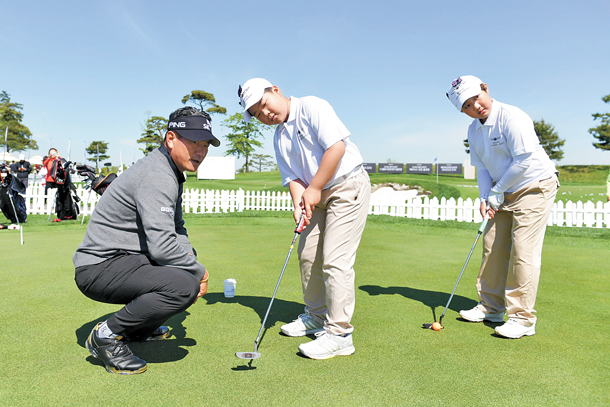 PGA golfer Choi Kyung-ju is having the busiest season of his career. He hasn’t had a single day off since arriving in Korea on May 14.

Choi, who mainly plays on the PGA Tour, is competing in two KPGA events here - the SK Telecom Open and the Genesis Championship - and in between, he played a charity event and hosted special lessons for young golfers.

At the SK Telecom Open this past weekend, heavy rain during the first two days of the tournament forced organizers to delay Choi’s rounds to the third day, where he had to play 36 holes. His round ended up lasting nine hours, and he finished tied for 35th with a score of one under par.

After that, Choi attended a charity event for young golfers. Despite the tight schedule, he’s been all smiles. “If there’s something I can do, then I should do it,” he said. “Not only for the younger players - if it helps the fans and sponsors, then I should be willing to do it.”

Choi, who acts as a mentor to many young golfers, doesn’t see the events as interrupting his tour activities. “I’m thankful that I can attend different events,” he said.

In the United States, Choi has been something of a trailblazer for Korean golfers. He’s won eight PGA Tour events and spent 40 weeks in the top 10, the longest streak among male Korean golfers.

“I’ve seen a lot of young golfers that can continue the legacy of Korean golf,” Choi said. “I really enjoyed spending time with younger golfers throughout the tournament. I felt like they got a lot more mature with their game.”

This week, he’s not getting much of a break. Starting today, he’ll be competing at the KPGA Tour’s Genesis Championship at the Jack Nicklaus Golf Club Korea in Incheon.

Choi will tee off on the first hole at 11:50 a.m. today, along with Hwang In-choon and Charlie Wi, who is playing in the KPGA event for the first time since October 2016.

After the tournament, he’ll be heading straight to the United States to compete in a PGA Tour event, the Memorial Tournament, from May 31 to June 3. Later, he has a U.S. Open qualifier as well.

“I’ll have to wait until after June to spend time with my family,” Choi said.