Trump says U.S.-North summit may not happen on June 12

Trump says U.S.-North summit may not happen on June 12 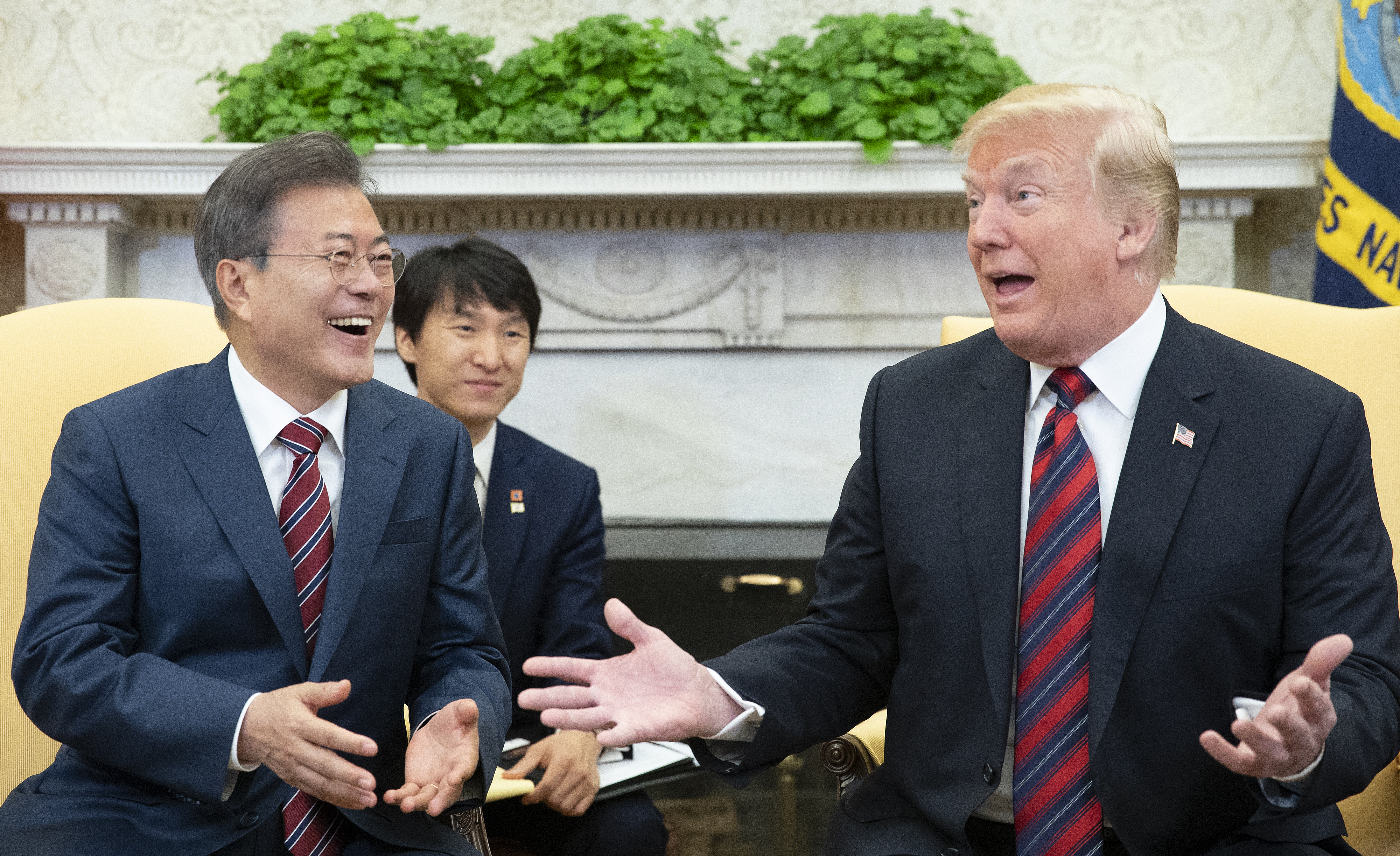 President Moon Jae-in, left, speaks with U.S. President Donald Trump in the Oval Office at the White House in Washington on Tuesday. [YONHAP]

WASHINGTON --- U.S. President Donald Trump said Tuesday there was a “very substantial chance” that his summit meeting with North Korean leader Kim Jong-un next month could be delayed if conditions are not right, indicating his dissatisfaction with the North’s recent threat to pull out of the talks.

“There’s a lot of substantial chance that it won’t work out,” said Trump during a question and answer session with reporters in the Oval Office on the sidelines of his summit with President Moon Jae-in.

“There are certain conditions we want to happen. I think we’ll get those conditions. And if we don’t, we won’t have the meeting,” he said, “If it doesn’t happen, maybe it will happen later.”

“Certain conditions” apparently refers to the North’s assurance that it will give up its weapons of mass destruction in a complete, verifiable and irreversible (CVID) manner.

While Trump mentioned the possibility of delaying the June 12 meeting, he also noted there was a “good chance” that it would happen in the future.

“It may not work out for June 12th. But there’s a good chance that we’ll have the meeting,” he said.

Trump said he would guarantee the “safety” of the Kim regime if Kim cut a denuclearization deal at the summit meeting. Borrowing from his famous campaign slogan, he said “very large sums of money” would be poured into North Korea from China, Japan and South Korea in investments to “make North Korea great” if an agreement is reached.

“They can’t be a great country under the circumstances that they’re living right now. North Korea has a chance really to be a great country and I think they should see the opportunity and we’ll soon find out whether or not they want to do that,” he continued.

Trump’s remarks hinting at the possibility of delaying, or scrapping, the highly anticipated Pyongyang-Washington summit came amidst growing skepticism and concerns in Washington over whether the Kim Jong-un regime is really intent on ridding itself of nuclear weapons.

The North’s threat last week to walk away from the meeting in protest of the U.S. push for CVID has put the prospect of the Kim-Trump meeting in question.

The North’s sudden shift of stance to rebuke both Washington and Seoul has cast a cloud of uncertainty over the June 12 summit. Unhappy with the recent developments, Trump reportedly peppered his aides with questions asking the wisdom of hosting the summit, worried about the possibility of inviting political embarrassment if Kim comes to the table refusing denuclearization, according to a New York Time report published Sunday.

Moon, aware of looming questions and skepticism among U.S. officials over the prospect of North Korea denuclearization, tried to inject a positive note in an attempt to ease such skepticism and put to rest speculation about the Kim-Trump summit being called off.

“I am very well aware that there is skepticism in the U.S. on the question of whether the denuclearization of North Korea could be possible. But if one makes a presumptuous judgement that it will fail this time just because of past failures, there will be no progress of history,” said Moon.

Sounding optimistic about the prospect of the June 12 meting, Moon said the successful outcome would represent a “profound turning point in world history.”

Noting it will be the first time that an agreement will to be reached between the leaders of North Korea and the U.S., Moon expressed his trust in Trump, attributing recent diplomatic developments on North Korea to Trump’s ability as a deft negotiator.

“It is President Trump who made the upcoming [North-U.S.] summit possible,” said Moon. “I have every confidence in Trump that he will have the successful North-U.S. summit so that we could [formally] end the Korean War, which we have not been able to do over the past 65 years, and achieve denuclearization of North Korea and set in place a peace regime on the Korean Peninsula as well as normalize relations between North Korean and the U.S.”

Moon also said his conviction that there will be a successful North-U.S. summit derives from his confidence in Trump’s character, saying, “I am confident that Trump will achieve a historic feat that no one has been able to achieve in past decades because it is President Trump [who will negotiate with North Korea].”

On growing questions about the Kim-Trump summit, Moon said he was “confident” that it will take place, while acknowledging looming concerns in the U.S. over the prospects of the summit due to the North’s recent hardline stance.

“I promise that I will always stand by President Trump and offer my help to the best of my ability to make the North-U.S. summit successful,” he said.

When asked about his role brokering the Kim-Trump meeting, Moon stressed his relationship with Trump was based on a partnership to form a strategy for the successful June 12 summit since its outcome would “greatly impact the fate” of the two Koreas.

In return, Trump also showered Moon with praise, saying South Korea was “lucky” to have Moon as president.

After the 30-minute long question and answer session ended at 12:42 p.m., the two leaders had a one-on-one meeting, accompanied by interpreters, that ran for 20 minutes. The one-on-one meeting was followed by an extended, luncheon meeting joined by officials from both sides, which ran until 2:09 p.m.

The Blue House said Moon and Trump agreed that the June 12 summit meeting should take place as scheduled and exchanged thoughts on the North’s recent offensive posturing toward the two allies. Moon also emphasized that there was no need to doubt the North’s determination to have the North-U.S. summit, despite its threat last week to walk away from the talks.

“Jitters held by the North about denuclearization are [directly] linked to its anxiety about regime security,” said a senior presidential official speaking on the condition of anonymity. “The two leaders talked about the need to have discussions on ways to ensure the North of its regime security.”

While Moon apparently tried to persuade Trump to stick with the June 12 summit, it remains to be seen whether the high-stakes meeting will take place as planned as Trump raised the prospect of delaying or scrapping it if the North does not guarantee on denuclearization.

Following his meeting with Trump, Moon paid a visit to the former Korean legation building in Logan Circle Historic District in Washington, which was Korea’s first diplomatic office set up in 1889. The Blue House said Moon’s visit signified the strong alliance of the two nations. Moon left Washington later in the day, ending his two-day visit. He was due to arrive in Seoul early Thursday.