Trump suggests summit with Kim will be held on schedule

Trump suggests summit with Kim will be held on schedule 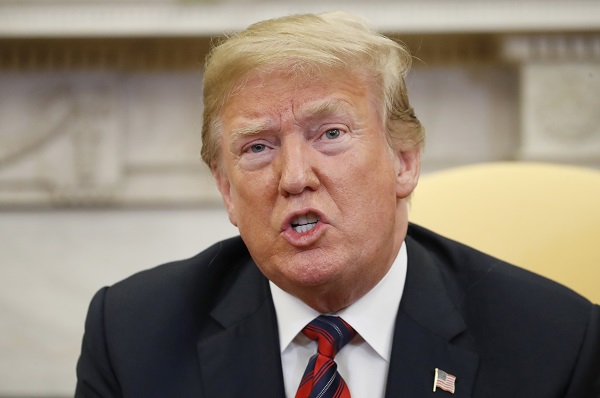 President Donald Trump speaks during a meeting with Joshua Holt, who was recently released from a prison in Venezuela, in the Oval Office of the White House, Saturday, in Washington. [AP/YONHAP]

U.S. President Donald Trump said Saturday he is still “looking at June 12 in Singapore” for a summit with North Korean leader Kim Jong-un, which he abruptly called off less on Thursday, reviving expectations that a historic meeting might take place as initially planned.

“It's moving along very nicely,” Trump continued. “So we're looking at June 12 in Singapore. That hasn't changed.”
Likewise, North Korean leader Kim in his Saturday summit with Moon relayed that the June 12 North-U.S. summit must be held successfully and pledged again his commitment to denuclearization of the Korea Peninsula.

“There is a lot of good will,” Trump told reporters in the White House, adding that “people want to see if we can get the meeting and get something done.”

Trump further elaborated that many people “are working on” planning for the summit, alluding to discussions going on through the so-called New York Channel – diplomats based in New York -- and that “there are meetings going on as we speak in a certain location which I won’t name.

“If we got that done and if we can be successful in the denuclearization of the Korean Peninsula,” said Trump, “it would be a great thing.”
When asked about the second summit between Moon and Kim, Trump replied, “Those talks have gone very well,” adding that he was “fully impressed.”

Trump, a self-purported dealmaker, has taken Pyongyang on a roller-coaster ride over the past three days from his abrupt cancellation of the U.S.-North summit Thursday, to informing White House reporters some 60 hours later that the date and location of the meeting “hasn’t changed.”

But Trump left open the door to holding such a meeting, telling the North to call or write if it changes its mind.
The cancellation coincided with North Korea’s alleged demolition of its Punggye-ri nuclear test site with journalists from five countries covering the event. U.S. Secretary of State Mike Pompeo, who secured the release of three Korean-American detainees during a visit to Pyongyang earlier this month, told a Senate committee that day that a pressure campaign on the North will continue.

North Korean First Vice Foreign Affairs Minister Kim Kye-gwan in a conciliatory statement on Friday, expressed “great regret” about Trump’s cancellation of the summit and underscored that Pyongyang was willing to talk with the United States “anytime.”

To this, Trump responded over Twitter on Friday, “Very good news to receive the warm and productive statement from North Korea. We will soon see where it will lead, hopefully to long and enduring prosperity and peace. Only time (and talent) will tell!”

In a tweet earlier Saturday, Trump forecast that the summit may be revived, writing: “We are having very productive talks with North Korea about reinstating the Summit which, if it does happen, will likely remain in Singapore on the same date, June 12th,” but added that if necessary, it “will be extended beyond that date.”

In another tweet, he also criticized the New York Times, adding, “there is ZERO disagreement within the Trump Administration as to how to deal with North Korea.”

The sudden cancellation of the North-U.S. summit has prompted speculation that the two sides have faced some hiccups in coming to an agreement on what constitutes the denuclearization of North Korea.

As if to assuage some of Pyongyang’s concerns, Trump has been indicating that he will follow his own style of denuclearization, different from the 2003 Libya model that has been cited by his national security adviser, John Bolton.

Trump assured he will “guarantee” North Korean leader Kim’s safety, along with the prosperity of his country, if Pyongyang agrees to complete, verifiable and irreversible denuclearization (CVID), during a summit with President Moon in Washington early last week.

But Trump also noted a change in the North’s attitude following Kim’s second summit with Chinese President Xi Jinping earlier this month.
Trump has also expressed some flexibility on the denuclearization of North Korea, tell Fox News in an interview that aired Thursday that while he would “like to have it done immediately, but physically, a phase-in may be a little bit necessary,” although it would have to be a “rapid phase-in.”

The White House is carrying out plans for the summit and said its “pre-advance team for Singapore will leave as scheduled in order to prepare should the summit take place,” according to its press secretary, Sarah Huckabee Sanders, in a statement late Saturday, following news of the second Moon-Kim meeting.

Reuters and CNN reported last week that the U.S. delegation would include White House Deputy Chief of Staff Joseph Hagin and deputy national security adviser Mira Ricardel, citing U.S. officials, and that they would arrange the agenda and logistics for the summit with North Korean officials. Hagin is Trump’s top logistics official, while Ricardel was appointed last month by Bolton.