The Lotte Giants finally ended their six-game losing streak by defeating the Nexen Heroes 6-4 at Gocheok Sky Dome on Sunday. 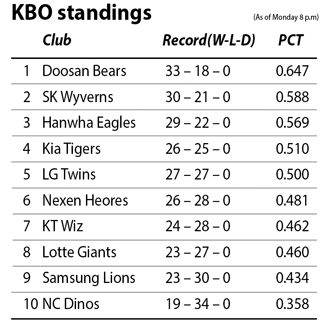 The Giants started with the lead after Son Ah-seop and Lee Dae-ho scored home runs at the top of the first. The Heroes responded at the bottom of the fourth by scoring four runs to take the lead 4-3. Just when it seemed the Giants were going to lose another game, Lee hit a three-run home run to hand the Giants their first win since the game against the Doosan Bears on May 19.

It wasn’t all good news for the Giants though, as the Heroes still won the series with a 3-2 win on Saturday and a huge 13-2 victory on Friday.

Sunday also saw Lee’s first home run since a game against the Kia Tigers on May 2. The Giants are having an inconsistent season, with the team starting last, moving up as high as fourth in the standing at the start of May and then plummeting back down to eighth again.

Over in Incheon, the Hanwha Eagles defeated the SK Wyverns to avoid a weekend sweep on Sunday.

While the Eagles were leading 3-0, the Wyverns quickly took the lead by scoring two runs each in the fifth and sixth innings. The Eagles evened the score to force the game into an extra inning, then added three more at the top of the tenth to defeat the Wyverns 7-5.

This was also the Eagles’ first win against the Wyverns since Aug. 26. The win has put the Eagles just one game behind the Wyverns, currently ranked second in the league. Kim Tae-kyun set a new record in the KBO, hitting his 300th career home run.