Assistant coach jets off to take a look at Swedish team

The Korea Football Association (KFA) said Cha will fly to Stockholm to analyze the Swedish national football team. Sweden will face Denmark on Saturday at the Olympic Stadium in Stockholm and will take on Peru at Ullevi Stadium in Gothenburg on June 9 for their World Cup tuneups.

The KFA already announced that Cha will be the one who will use a statistic tablet from the stands to communicate with coaching staff on the bench during the World Cup match against Sweden. For this World Cup, FIFA approved the use of two tablets to share match data during the match. 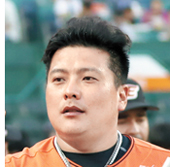 
Kim Tae-kyun of the Hanwha Eagles has been excluded from the entry due to muscle damage on his left calf.

During the Eagles’ game against the SK Wyverns on Sunday, Kim felt a pain in his left calf and walked back into the dugout. After going through a medical examination, the Eagles said in a statement on Monday that Kim is likely to need about a month for recovery.

This is the second time this season that Kim has been excluded from the Eagles’ entry.

Kim recently hit his 300th career home run on Saturday. This season, his batting average is at 0.319 with seven home runs and 18 RBIs.