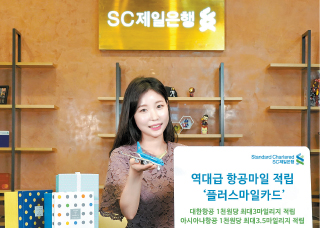 Frequent fliers know how important keeping track of air miles is. Ten years ago, a number of airlines around the world changed their policies and extended the deadline on air mile expiration to ten years. Now, as those first ten-year air miles start to expire, it’s more important than ever that regular travelers find a way to save up those all-important miles.

Standard Chartered Bank Korea’s Plus Mile Card, launched on March 29 this year, is a great way for regular fliers to collect air miles every day. The card is available in either a Korean Air or Asiana Airlines version, and miles from other affiliated international airlines can also be collected.

A coupon for a Starbucks coffee will be given to new cardholders who spend 30,000 won with their Plus Mile Card by the end of July.
More information is available on the Standard Chartered Bank website (www.sc.co.kr) or from the customer service center (1588-1599).