Barely enough room to swing a bat in Daejeon

Barely enough room to swing a bat in Daejeon 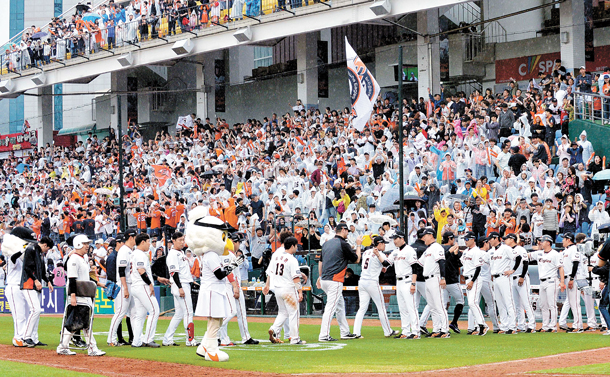 Hanwha Eagles’ fans have always been fervent in their support for the men in orange and gold. Despite ten years languishing in the bottom half of the table, the Daejeon team has never lost its supporters or struggled to get people to turn out for games. The Eagles have finally soared to the top of the league this season and the fans are more excited than ever.

The problem is, there’s nowhere for them to sit.

As of Sunday’s weekend series, the Eagles have had six sellout games, the most in the KBO. That statistic sounds impressive, but Daejeon Hanbat Baseball Stadium is comparatively tiny, seating just 13,000. Hanbat is so small that a sellout game in Daejeon would only just fill half of Jamsil Baseball Stadium in Seoul, which has 25,000 seats.

So although the Eagles keep selling out their stadium - on May 24 they even sold out on a weekday, the only team to do so this season - they’re actually not selling that many tickets. The LG Twins have sold the most tickets this season, at 459,138 as of Sunday, while the Eagles have only sold a paltry 242,640, placing them back in familiar territory at eighth in the league in terms of ticket sales.

As excited as Eagles fans are to see their team finally make good on a decade of woes, there is just not enough seats to go around. And the demand is definitely there - the Eagles have some of the highest viewing figures for televised games.

The Nexen Heroes and the NC Dinos, considered the two least popular teams in the KBO, are the only two behind the Eagles in the total number of fans this season.

Fewer seats also means the Eagles are making less money. Jamsil Baseball Stadium earns 390 million won for a sellout game, whereas Hanbat makes just 165 million won. The Eagles don’t do any better on the road - the income from ticket sales is split between home and away teams, but the home team receives 72 percent of sales and the away team receives 28 percent.

“It’s a very good thing to have sellout games but when we compare it to other clubs that have bigger stadiums, we feel discouraged,” said a source close to the Eagles.

Daejeon Hanbat Baseball Stadium first opened in January 1964. The Eagles now have the oldest stadium in the KBO. The Samsung Lions and the Tigers, who used to have old stadiums as well, have both built new stadiums in the last few years.

The Eagles stadium is now the oldest and smallest in the league. It’s been renovated three times since 2012, but there is very little sign of change. Fans still struggle to find amenities and restrooms and access to different levels of the stadium is difficult due to the old, narrow stairways.

The fans aren’t the only ones struggling. The locker room and gym are so small and cramped that other players dread an away game in Daejeon.

“Changwon will open a new stadium next year,” said Heo Goo-yeon, a commentator for MBC Sports Plus. “There is also talk of new stadiums in Seoul and Busan. But Daejeon hasn’t said a word about a new stadium. On the weekends, a lot of fans from Seoul, Busan, Daegu, Gwangju and Changwon visit Daejeon, but the stadium can’t handle the crowds. It’s a problem [for the club] to continue using a stadium that was built in 1964.”