‘Korea discount’ could be at end: FSC head

‘Korea discount’ could be at end: FSC head 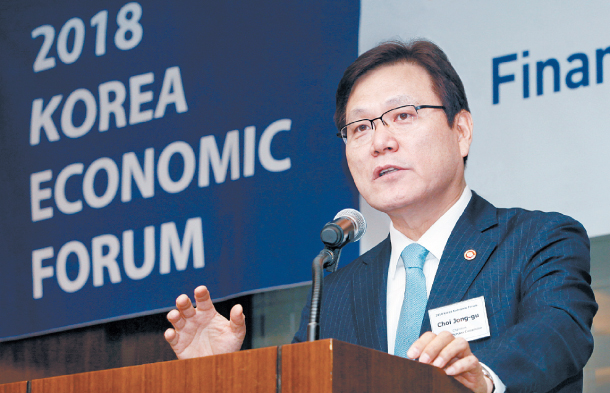 “The Korea discount has existed in the South Korean market, partially due to the obscure corporate governance structure of the local companies but more importantly because of the geopolitical risk,” said Choi Jong-ku, chairman of the Financial Services Commission (FSC), on Wednesday at the Korea JoongAng Daily’s 2018 Korea Economic Forum at the Westin Chosun Hotel in central Seoul. “With denuclearization of the peninsula underway, it’s clear that this geopolitical risk will be mitigated by a great deal.”

The Korea discount refers to a condition in which global investors undervalue South Korean stocks due to factors that weigh down on the country’s economy, such as constant threats and nuclear and missile tests by the North.

“Foreign credit rating agencies and leading investment banks project that the value of the [South Korean] stock market will increase by as much as 10 percent and the country’s GDP [gross domestic product] by 3 percent,” Choi continued. “But promising figures aside, the real economy of the country has been robust and the financial structure and earnings of South Korean companies have improved, most of which are yet to be fully reflected in the market.“

Healthy earnings by local companies, along with other auspicious indicators, will also keep the country safe from external uncertainties such as the recent interest rate hike by the U.S. government and the prolonged financial crisis in emerging economies.

“Interest rate increases will continue for a while, but I think South Korea will be safe from their impact,” Choi said.

Other than strong performances by private companies, Choi cited Korea’s foreign-exchange reserves, which hit a record-high in April of $398.42 billion, and its current account surplus, $5.13 billion as of March this year.

Even so, concerns about foreign capital retreating from the South Korean market have been on the rise, especially after interest rate increases this year.

In March, the U.S. Federal Reserve lifted the funds target range to 1.50 percent to 1.75 percent, up 0.25 percentage points from before, which made the U.S. base rate higher than the benchmark rate of South Korea for the first time in 10 years and seven months. Experts speculate the U.S. Fed is likely to raise the rate again next month.

“If you look at foreign capital in the country, over 70 percent is invested in the central bank or sovereign wealth fund,” Choi said, refuting such worries. “These investors look at the fundamentals of the country’s economy and make a long-term investment, which means they will not move [out of the country] just because of a temporary disparity in the interest rate.”

Risks stemming from mounting household debt, which some consider a ticking time bomb especially when interest rates go up and borrowers must pay more, have also been somewhat alleviated, the FSC chairman said. Total lending to South Korean households hit a new high of 1,468 trillion won ($1.36 trillion) at the end of the first quarter of this year.

But according to Choi, the proportion of fixed-rate loans — which don’t become more expensive to service when interest rates rise — out of the total amount stands at around 45 percent right now, a notable improvement from earlier. In 2014, only 24.6 percent of all loans issued were fixed-rate.

“The government will remain vigilant about the impact of the rate increase but there is little possibility that it will imperil the country’s economy,” the chairman said.

“Activist hedge funds are able to make their cases because they have the approval of the market and other investors,” Choi said, referring to recent pressure from the U.S. hedge fund Elliot on South Korean conglomerates such as Hyundai Motor Group, the country’s top automotive group, to pay out more dividends and revamp their corporate structure. Choi said the case is demonstrative of the lack of trust by the investors and their disapproval of the management.

“The fundamental solution to the problem is to increase transparency and [overhaul] the corporate governance structure,” he added. “Domestic institutional investors must assume an active role in this regard, taking advantage of the stewardship code.”

A stewardship code, although not legally binding, is a set of guidelines that encourages institutional investors to disclose their engagement with the companies they invest in and the logic behind their voting activities. The National Pension Service, a state-run pension fund and the largest institutional investor in the country, is set to adopt the code in July.

When asked about cryptocurrency, whose popularity among South Korean investors waned drastically after the government imposed measures to limit trading, Choi said the authorities have no intention to impose new regulations.