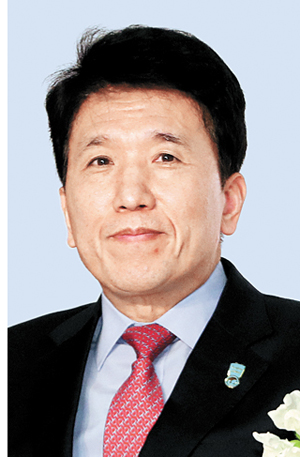 After the Seoul prosecutors’ office submitted a warrant to arrest KEB Hana Bank President Ham Young-joo on Wednesday over nepotism charges, other banks embroiled in similar investigations are worried.

The prosecutors’ office charged Ham with violating the Equal Employment between Men and Women Law and obstruction of business. The warrant will be reviewed by courts today at 2 p.m.

It’s unusual for prosecutors to request an arrest warrant for a sitting bank president.

The KEB Hana Bank president is accused of providing special favors in the hiring process to candidates that were chosen by the bank’s outside director and executives at Hana Financial Group affiliates.

Ham became the first president of the then-new KEB Hana Bank in 2015, despite his humble background.

Ham started his career in banking right out of high school, although he earned his bachelor’s degree in accounting from Dankook University while he worked.

This was a stark contrast to then-contender Kim Byeong-ho, former vice chairman of Hana Financial Group, who retired in April. Kim was considered an elite candidate to lead the bank, as he not only graduated from Seoul National University but earned his MBA from the University of California-Berkeley.

KEB Hana Bank has been the central target of the Financial Supervisory Service’s nepotism investigation.

In December and January, the watchdog found that among 22 cases of suspected of nepotism in recruitment, more than half, or 13 cases, were reportedly committed by KEB Hana Bank.

A full 14 percent of employees recruited in 2013 were suspected of being hired outside proper channels. The FSS believes that much of Hana Financial Group’s top brass was involved.

KEB Hana Bank isn’t the only bank that’s in the sights.

KB Financial Group Chairman Yoon Jong-kyoo is also currently suspected of meddling in the hiring process. KB Kookmin Bank is currently accused of three cases of improper hiring, one of which involves the granddaughter of Yoon’s sister. During the bank’s shareholder meeting, Yoon apologized for the controversy.