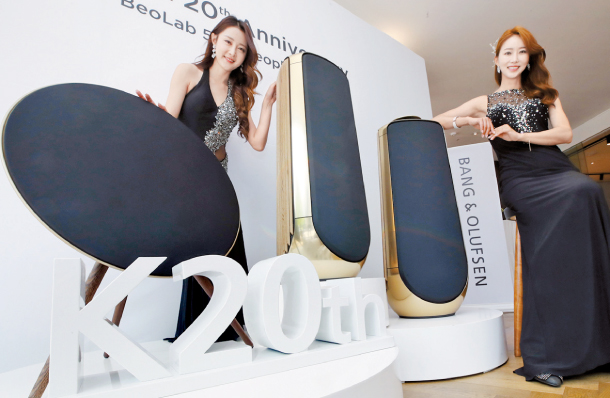 Models pose next to Bang & Olufsen’s limited edition speakers designed for the Korean market at its Apgujeong branch, southern Seoul, on Thursday. [YONHAP]

Premium audio electronics company Bang & Olufsen launched a special edition speaker for the Korean market commemorating the 20th anniversary of its business in the country on Thursday.

The Danish company said it is the first time it has introduced a product designed specifically for a single country, adding that the launch signifies how important the Korean market is to the company.

“Korea is well known for their appreciation in craftsmanship and design,” said President and CEO Henrik Clausen of Bang & Olufsen during a press event held Thursday at the company’s Apgujeong branch, southern Seoul. “There is no doubt Bang & Olufsen’s brand and strong heritage resonates well with Korean consumers.”

Bang & Olufsen’s business has been recording double-digit growth annually since its launch in Korea Galleria Department Store in 1998. By the end of this year, the Korean operations is expecting roughly 25 billion won ($23 million) in revenue, a company spokesperson said.

The “Korea 20th Anniversary Special Edition” speakers are based on the company’s existing BeoLab 50 and Beoplay A9 audio systems. While the audio performance is the same, the company decided to add a brass color lineup to the audio systems and carve an exclusive K20th signature motif on the special edition versions.

The BeoLab 50 home theatre product is 42.3 million won and the smaller Beoplay A9 costs 3.5 million won on the local market.

On the question of further collaboration with other Korean companies, Clausen said the company’s basic principle is to go deeper in a relationship with a partner that shares the same ambition rather than building a wide range of relationships.