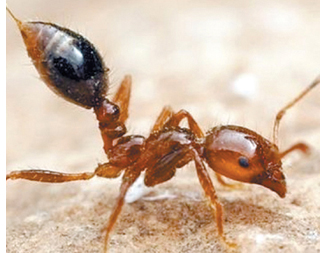 Red fire ants like the one pictured have been discovered in shipping containers in Busan. [JOONGANG ILBO]

Two red fire ants with potentially lethal venom were found in the Port of Busan on Wednesday.

Officials from the Animal and Plant Quarantine Agency said they found the insects in a container of dried bamboo from Fuqing, China.

“The two ants are worker ants and do not have the ability to form new colonies,” the Ministry of Agriculture, Food and Rural Affairs, which has purview over the agency, said in a statement on Wednesday. “The container was closed until the two ants were found, so we don’t believe there are any more that could have gotten out.”

Quarantine officials sterilized the container and surrounding area as soon as they discovered the ants, the ministry said.

Red fire ants range in size from 2 to 6 millimeters (0.2 to 0.6 centimeters) and are found in 26 countries, including Australia, China and the United States. Their stings can cause a burning sensation and lead to itchy sores. People with allergic reactions to the venom can go into life-threatening shock.

Korea has dealt with red fire ants before. Last September, quarantine officials discovered 25 ants in a storage container at Busan’s Gamman Port. A nest capable of accommodating 1,000 ants was found alongside them, raising alarm that the highly invasive species might proliferate in the country.

Quarantine officials investigated the ports in Busan and sterilized them. No remains of a queen ant were found at the time, and authorities concluded that she must have died, based on the size of the colony discovered earlier. They were unable to determine from where the ants might have originated. The specific port in Busan handled shipments from Australia, China, Japan, Malaysia, Taiwan and the United States.

Earlier this week on Monday, a fire ant was found in dry grass imported from Australia, but the ministry said it was not the species discovered on Wednesday.

“The ant found on May 28 was not the Solenopsis invicta, but the tropical fire ant, or Solenopsis geminata, which is less hostile than the invicta and has weaker effects on humans,” the ministry said in the statement. Tropical fire ants are found in 73 countries, according to the ministry.