KANG MIN-SEOK
*The author is an editorial writer for the JoongAng Ilbo. 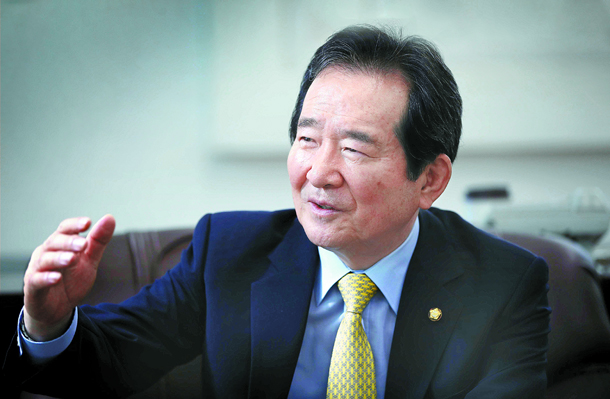 Hotlines are established for direct communication between governments. One of the most prominent in history connected U.S. President John F. Kennedy to the Kremlin in the Soviet Union. It was set up after the Cuban missile crisis in 1963.

On April 20, an inter-Korean hotline was established between the office of President Moon Jae-in in the Blue House and the State Affairs Commission in North Korea. A hotline can prevent accidental or minor issues from escalating into war, and the presence of an inter-Korean hotline itself can help alleviate tension on the peninsula.

The idea of hotlines is expanding and evolving. One set up between the president and the National Assembly speaker was controversial during the previous administration.

In 2014, then-Speaker Chung Ui-hwa asked the now-ousted President Park Geun-hye for a direct line. Park agreed, and her chief of staff gave him a number and said it was confidential. But Chung never spoke to Park. According to his account, he called twice, but no one answered. He tried texting and still got no response.

And what about President Moon and outgoing Speaker Chung Sye-kyun? In a recent interview, Chung said, “In my opinion, President Moon is different from others. He is not domineering and is very modest. I’ve always felt that one third of his campaign promises should be kept. It would be nice to do another third and reconsider the rest, but he tries to keep all his promises. He is very meticulous. His high approval rating is not without reason.”

Chung has maintained an amicable relationship with Moon since the era of Roh Moo-hyun. Since Chung has such high regard for Moon, I imagine there must be a frequently used hotline between the president and speaker, but there isn’t. Chung said he does not even know Moon’s personal number.

The speaker did have several phone conversations with Moon before the confirmation of Supreme Court Chief Justice Kim Myeong-su in September, but he received the calls from an unknown number. Besides, “the president and speaker should not be talking frequently,” he said.

Chung has his reasons. In order to maintain the legislature’s independence, he needs to keep a certain distance. “What would I do if the president made a request during a conversation?”