Chinese tourists move on from the face mask craze

Chinese tourists move on from the face mask craze 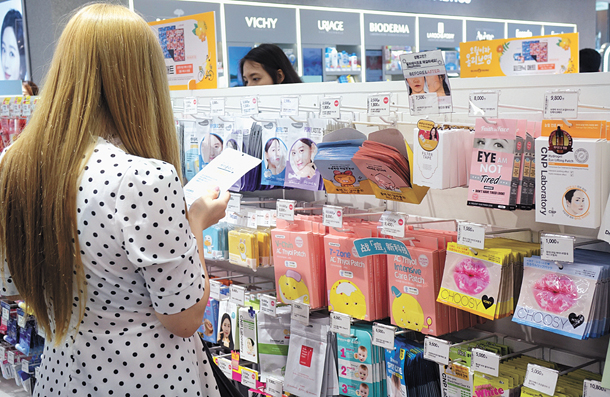 A Chinese tourist shops at a section devoted to acne patches at a Myeong-dong, central Seoul, branch of retailer Olive Young on May 30. A sticker patch for acne from Olive Young is one of the most popular products among Chinese tourists. [OLIVE YOUNG]

Olive Young’s Myeong-dong flagship store in central Seoul has reshuffled its product placements, as Chinese tourists have started filling their shopping bags with more unorthodox items and shying away from the face masks that used to dominate sales among individual buyers.

The health and beauty product chain has moved portable bladeless fans, a big hit among Chinese tourists, to a prominent place on the store’s staircase from a forgotten corner of the second floor.

According to sales analysis of four stores in Myeong-dong from April 29 to May 8, sales to foreigners increased by 54 percent from the same period last year.

More than 60 percent of customers at these stores are foreigners, most of whom are Chinese. These locations also saw a 160 percent increase in payments made using the Chinese mobile payment system Alipay since last year. Alipay is generally used by individual Chinese tourists. The analysis excluded purchases made by Chinese bulk resellers who purchase large quantities of items at a time.

The item that was most popular among Chinese tourists was the Olive Young Care Plus Trouble Care Spot Patch, a sticker patch that soothes acne spots. Second place among the best-sellers was the Face Halo, a face cleansing pad that allows users to remove makeup using only water. Cosrx One Step Original Clear Pads, pre-soaked toner pads, came in third place.

The biggest change, however, is that face masks are no longer as popular as they once were. In 2016, face masks were the best-selling products among Chinese customers at Olive Young.

Fresh products have taken their place, such as the Zero9 Bladeless Portable Fan, in fourth place, and the Beauty Suction Pore Vacuum by The Only One, which came in at fifth. Neither product was a top seller among Korean customers.

These days, Chinese customers are more aware of products sold in Korea thanks to the internet and social media, according to employees at popular stores in Myeong-dong. They are now sticking to predetermined best-sellers.

“Up until two or three years ago, Chinese tourists were asking our shop employees for recommendations of popular items or product descriptions,” said Jeon Jung-seok, manager of Olive Young’s Myeong-dong branch. “But these days, they seem to be getting the information they need from social media and picking out the products they want without help from employees.”

“Due to the popularity of Korean face masks in China, a lot of resellers have been buying them in bulk and selling them in China,” said a cosmetics industry insider.