The LG Twins don’t have many enemies. The Seoul-based team has made a home for itself in the middle of the table - the club hasn’t won the pennant or championship since 1994, but regularly makes it to the postseason. The Twins are in comfortable territory again this year, sitting in fourth place as the season nears the halfway point, and slowly inching toward a playoff spot. 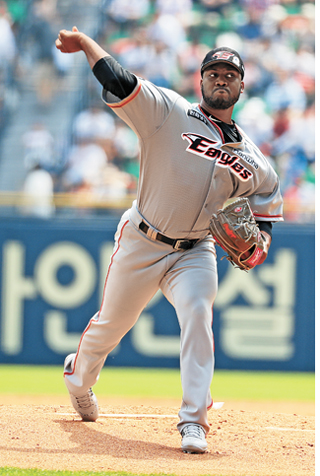 Keyvius Sampson of the Hanwha Eagles throws a pitch during a game against the LG Twins on Wednesday. [YONHAP]

But there’s one player who’s built his reputation on being the Twins’ nemesis. Nicknamed the “LG Killer,” Keyvius Sampson of the Hanwha Eagles can’t seem to help but defeat the Twins any chance he gets.

Sampson, new to the KBO this year, has had a mixed season. He started off slow, struggling to find his feet in his new environment, but has now developed into one of the Daejeon-based team’s star players. With a record of five wins and five losses and a 4.09 ERA, Sampson has turned his season around and is quickly becoming one of the KBO’s most dangerous pitchers.

But it’s against the Twins that Sampson has really found his feet. On the three occasions he has faced the Twins so far this season, Sampson has walked away with a win every time. On Wednesday he ended LG’s seven-game winning streak, leading the Eagles to a 5-1 victory.

With the ability to throw a fastball at over 150 kilometers (93.2 miles) per hour, Sampson is the current strikeout leader in the KBO, with 92.

Sampson has already had three games this season with 10 strikeouts. At this rate, if he pitches 200 innings this season he is on track to get 250 strikeouts, a new KBO record. Currently, Choi Dong-won, formerly of the Lotte Giants, holds the record for the highest number of strikeouts in a single KBO season, at 223 in 1984.

“It’s more important for an ace pitcher to throw longer innings than to have more strikeouts,” said Han Yong-duk, manager of the Eagles, prior to a game against the Twins on Wednesday. “Recently, Sampson’s been trying to push ahead the batters with power. I want him to trust our defense and pitch [more effectively].”

Sampson lived up to Han’s expectation on Wednesday, as he managed to toss 103 balls in seven innings while striking out five. Though he only struck out five, his second-lowest number of strikeouts this season, he still managed to toss seven scoreless innings.

Despite Sampson’s impressive strikeouts and the speed of his pitches, his recent statistics - an ERA of 2.98 in his 10 most recent games - are especially surprising as he started the season so badly that the Eagles reportedly thought about releasing him.

Sampson lost his first three games of the season, starting with an ERA of 9.22. His fastballs were as quick as ever, but he didn’t seem to have any control over his pitches. During those first three games, Sampson gave up 14 walks.

But rather than releasing Sampson, Han gave the American pitcher time to settle in.

With the help of Song Jin-woo, the Eagles’ pitching coach, Sampson adjusted his posture and the change to his accuracy was immediately obvious.

In addition to the mechanical change, Sampson’s new pitch, a forkball, has given him an edge over the KBO batters. The forkball is more popular in Asian leagues than in the Majors, where it has fallen out of favor because it is a risky pitch that is hard to pull off and can leave pitchers with ligament damage. He learned his forkball from Park Sang-won, who is only in his second season in the KBO.