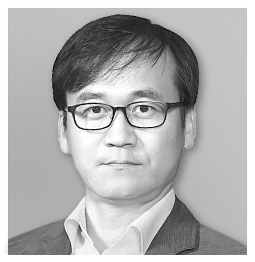 Jung Kyung-min
*The author is a senior editor of business and industry news at the JoongAng Ilbo.

The economic policy of the Moon Jae-in administration is based on three pillars — fairness, income-led growth and innovation. Fair Trade Commission Chairman Kim Sang-jo is in charge of ensuring more fairness in the economy and President Moon’s policy chief Jang Ha-sung deals with policies aimed at raising workers’ income to generate growth. Kim Dong-yeon, deputy prime minister for the economy, spearheads policy to promote innovation. In a recent cabinet meeting, Moon complained about little progress and vision on the innovation front before urging the deputy prime minister and his team to do more.

Kim, the deputy prime minister, has been busy since getting the reproach from his boss. He held a ministerial meeting on the theme of innovative growth last Friday. Later in the day, he met Shinsegae Vice Chairman Chung Yong-jin who expounded on the conglomerate’s investment plans on innovation while showing him a self-driving shopping cart at Shinsegae’s Starfield mall Hanam, Gyeonggi. Earlier in the day Kim told President Moon in his monthly report of the need to increase communication with the business sector. Moon said he will also show up at opening ceremonies and other corporate events to encourage their investments. A few days later, the Ministry of Strategy and Finance, also headed by Kim, set up a headquarters on innovation under his leadership.

Anyone can achieve innovation if talks and attention were all that is necessary. But what really stimulates innovation is the removal of heavy regulations piled up in the period of factory-led industrialization. All the past presidents vowed deregulation. Upon winning the election, former President Lee Myung-bak told his transition team to go into the field before making policies by citing the case of a shipyard he had visited that complained of a telephone pole that got in the way of its work. Former President Park Geun-hye held marathon talks on lifting regulatory barriers by vowing to “take the thorns out of the fingers” of the business sector. Despite all the rhetoric and showy actions, no progress has been made. The finance minister can hardly do away with bulky regulatory institutions, let alone past presidents.

Innovation is slow not because the deputy prime minister and his team are not pressing hard. Policymakers and advisers to the president are entirely engrossed in the income-led growth policy. The theory dates back to the post-Keynesian school, which accuses the markets of exacerbating economic inequality. The theory backers in Korea argue that all the benefits in deregulation would go to the big players and only build up the dominance of the chaebols in the Korean economy.

But in reality, all Korean job seekers wish to find work in public corporations or large companies because of the security and decent paycheck they offer. The liberal Moon administration does not like seeing big companies enlarging and expanding. Instead, the government is bent on increasing public-sector jobs. It must increase hiring in the sector because it had vowed to do so during the campaign. But income and job growth hinging on government spending can hardly last.

Of the employed in Korea, 25.5 percent are self-employed. The ratio is the fifth-highest among the member nations of the Organization for Economic Cooperation and Development. That’s not all. Of the self-employed, 71 percent are running a pitiful business with an operation fund of less than 50 million won ($46,236). Since small-scale employers are mostly poor themselves, they cannot afford new hiring under the new minimum wage that increased by double digits. Workers can expect a bit fatter monthly paychecks after their hourly wage base went up by 16.4 percent from the beginning of this year. But those hired by small workplaces fret about job security. Part-timers were likely in disbelief when the president claimed workers had a 90 percent positive effect from the hike in minimum wage.

You cannot achieve income-led growth or fairness unless the economy is backed by innovation. No matter how hard the government tries to even the playing field — and no matter how high the government seeks to raise the minimum wage — it means nothing if good jobs are not created in the private sector.

Large companies which are responsible for the big share of growth in the Korean economy cannot be excluded in the policy to generate innovations. The job policy is getting nowhere despite the record government spending because jobseekers are looking and trying for jobs in large workplaces, while the presidential office thinks it can lure them to the smaller companies through various incentives.

The Korean business community no doubt is imbalanced due to dominance by a few heavyweights. The authorities should rigorously watch out for conglomerates’ unfair practices such as assigning work and businesses to affiliates or engaging in illicit business successions. The government must not tolerate the excesses of owner families who treat their employers and businesses as their personal assets.