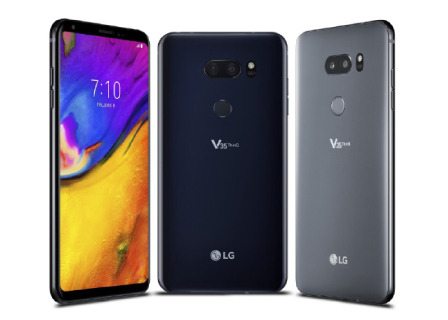 With LG Electronics set to release the V35 ThinQ smartphone early next month, mobile carriers in Korea are scrambling to get rid of their inventory of last year’s model by offering heavy discounts.

If customers add additional discounts offered by the carrier, the phone will be free.

As soon as the announcements hit on Wednesday, smartphone buyers began exchanging information about where they can get their hands on a V30+, but supply is limited.

The V series is LG’s top-of-the-line smartphone brand. The V30 and larger V30+ went on sale last September and were the first V models to come with an OLED display. The phones were also the first in the country to support Google Assistant, the Android version of Siri, in Korean.

LG went on to unveil a variant V30S ThinQ model in February. The phone comes with an artificially intelligent camera that can automatically enhance images.

The upcoming V35 ThinQ will sport a 6-inch OLED full-vision display with an aspect ratio of 18:9 and comes with two 16-megapixel cameras on the back and one 8-megapixel camera on the front. The software will include Google Assistant, Google Lens, which can analyze images, and DTS surround sound support.

This time, LG, which lags behind Samsung Electronics as Korea’s second-largest smartphone maker, has changed its sales tactic, launching first in the United States before bringing phones to Korea. The V35 ThinQ came out exclusively through AT&T in the United States on June 8. A week earlier, LG released the G7 ThinQ, a quasi-premium model, also in the U.S.

The series of launches will offer “more options that are suited to users’ varying preferences for premium phones,” an LG spokesman said.