Kim thanks Xi for summit help

Kim thanks Xi for summit help 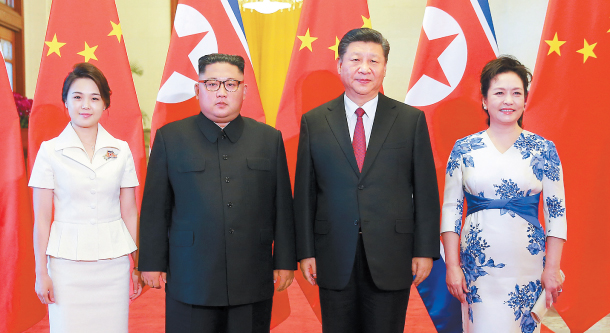 North Korean leader Kim Jong-un, center left, and his wife Ri Sol-ju, and Chinese President Xi Jinping, center right, and his wife Peng Liyuan, pose for a photo in the Great Hall of the People in Beijing on Tuesday in a KCNA photo. This was Kim and Xi’s third summit. [YONHAP]

The Korean Central News Agency (KCNA) said Kim thanked Xi for helping him with his summit with U.S. President Donald Trump on June 12 in Singapore, and that the young leader was pleased with the “recently strengthened strategic cooperation” between China and North Korea.

Pyongyang broke the news that Kim was visiting China for two days on Tuesday, even as the leader was still there. Kim’s two previous trips to China - in late March and early May - were reported only after his return home due to security reasons.

In the third summit between the communist leaders, Kim briefed Xi on the results of the “successfully held” North-U.S. summit. Also discussed were “beneficial views on a series of issues of mutual concern including the prospect for the denuclearization,” read an English version of the KCNA article.

Xi reportedly congratulated Kim for having “steered” the North-U.S. summit successfully and said Beijing will “continue to play its constructive role in the future.”

China’s state Xinhua News Agency said in an article Tuesday night that Beijing supported the North’s economic development, the improvement of its people’s livelihoods and its “development path that accords with its national conditions.” Those details were not in the KCNA report.

During a banquet hosted by Xi on Tuesday evening at the Great Hall of the People in Beijing, Kim reportedly said during a toast that if North Korea and the U.S. implement the agreement made at their summit “step by step,” the issue of denuclearizing the Korean Peninsula will “open up a new and important prospect,” an English version of the Xinhua article read.

Kim’s third summit with Xi was another sign that the North Korean leader was seeking security assurances and political backing from Xi as leverage against the United States. Analysts said China is trying to shore up its role in the meetings between Pyongyang and Washington to exert influence on peninsula affairs. Beijing would also like to remind Washington of its role in Asian affairs as a trade war develops between the two countries.

China is North Korea’s strongest trading partner, but bilateral ties soured last year after Beijing joined Washington’s maximum pressure campaign. Trump says sanctions will remain until significant progress is made in the North’s denuclearization process, although some analysts wonder if that is possible.

Kim timed his visits to China in between major summits and ahead of meetings with U.S. Secretary of State Mike Pompeo, who is expected to travel to the North Korean capital of Pyongyang this week for a third visit to flesh out the Sentosa agreement signed between Kim and Trump at their summit.

The vaguely termed agreement reflected a wide gap between North Korea and the United States on what denuclearization means, which makes follow-up talks crucial - and subject to risks that the detente between the U.S. and North Korea may not last.

It is unclear what “constructive role” China exactly played in the North-U.S. summit, but Trump didn’t shy away from expressing dismay at Xi’s influence on Kim in late May, weeks after Kim’s second visit to China. Trump said he was “a little disappointed” about Kim’s apparent change of posture after his second summit with Xi. He said there was “a little change in attitude” from the North Korean leader, without going into the details.

Around the time Trump accused Beijing of pulling strings, North Korea’s media resumed its vitriol-laden statements about the U.S., which had been scarce since January, and threatened to pull the plug on the planned North-U.S. summit twice.

Its main complaint: that the Trump White House was pressuring the regime to comply with complete, verifiable, irreversible denuclearization and mentioning Libya as a template for Pyongyang’s denuclearization process.

The Libya model is synonymous with a denuclearization framework in which a state gives up its weapons of mass destruction upfront as a precondition for sanctions relief.

What happened eight years after Libya signed that deal with the United States is at the heart of what Kim fears: Gaddafi was overthrown by anti-government, West-backed rebels and shot to death on Oct. 20, 2011, less than 10 years after he signed the denuclearization deal.

The North has urged their denuclearization process to be carried out in several phases, with the United States offering rewards for each step.

Kim might have discussed economic cooperation with Xi during his recent visit, based on the makeup of the delegation that accompanied him, which included Pak Pong-ju, premier of North Korea’s cabinet, who oversees North Korea’s economic policy. It was Pak’s first time accompanying Kim to China.

Pak Thae-song, vice chairman of the Workers’ Party Central Committee in charge of education and science policy, was also a part of Kim’s delegation; in mid-May, he also led a group of senior officials from the party to Beijing for a 10-day trip to learn about China’s development model.