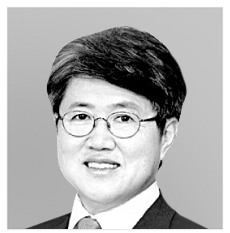 Yoo Gyeong-joon
*The author, former head of Statistics Korea, is a professor at Koreatech.

Most goods we use are private goods that can be traded in markets, but public goods are interesting commodities. There are two characteristics that set public goods from private ones. The first is non-exclusion, that no one can prevent another from using public goods, and the other is non-competitiveness, that one’s consumption does not diminish public goods.

Merchants cannot, or most likely will not, give someone an apple without payment. Here is an example of exclusion where someone is prevented from consuming the apple if they do not pay the right price. With competitiveness, if someone buys and consumes these apples, they disappear, leaving another potential buyer without apples to buy. Public goods are different in that no one may be excluded from using them and they do not disappear from consumption. National defense and storm warnings are some notable examples of this.

Producing statistics and a fair interpretation of them are public goods. Statistics Korea (Kostat) is a government agency that produce statistics related to citizens’ lives, and government-funded research institutes provide analyses of the statistics for the citizens. The statistics are necessary for people’s lives, but when left to the market, they may not be produced at all or be produced insufficiently.

Just because the government is delegated to produce statistics as a public good, it is not desirable for certain government ministries and officials to monopolize statistics and their interpretations. The production and interpretation of statistics are not simple and may be arbitrary. The representativeness of samples may be problematic, and statistics that are not sufficiently gathered could be interpreted differently depending on how it is looked at.

A more serious issue is the attempt to interpret statistical results to intentionally or unintentionally suit a certain purpose. It is a common trend worldwide. That’s why independence and neutrality of such agencies dealing with statistics are emphasized. 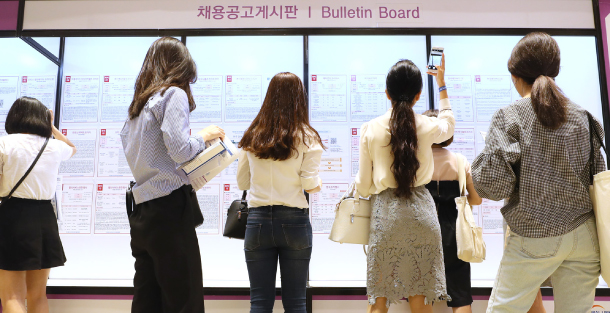 Youngsters are looking at a bulletin board to find a job at COEX, southern Seoul. Statistics Korea says that a total of 27 million workers were employed in Korea as of May, a paltry increase of 72,000 compared to a year ago and the lowest number of job additions since 2010. [YONHAP]

It takes some time to produce statistics needed to analyze the impact, and as of June, numbers for only the first three months of 2018 are available. Therefore, the minimum wage’s impact on overall employment and income distribution can only be speculated, and it is too early to tell from statistics alone.

Perhaps, it is only natural to highlight favorable outcomes. However, monopolizing Kostat statistics and their interpretations and releasing only the favorable aspects deserve criticism. The core of the problem is not the premature claims on the minimum wage’s impact on employment or income distribution but the practice of monopolizing detailed data and analyses of government-funded institutes among the few and selectively releasing the results.

It is widely known that the related statistical numbers were selectively used by some government agencies to publicize policies. Therefore, the media and citizens do not trust government reports because they suspect the statistics were misinterpreted or misused. It is vain to argue that the people and the media are mistaken or ignorant. If the right policies are implemented, the government has no reason to be impatient and should be humbler before the citizens.

As statistics are public goods, the independence and neutrality of the authority providing these statistics need to be guaranteed, and the outcomes and basic analyses should be shared with the citizens.