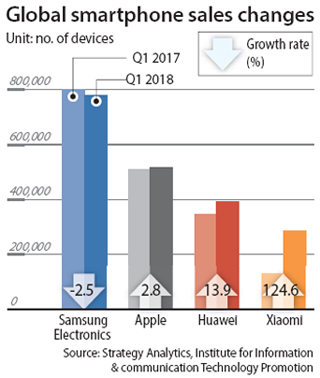 Korea’s days as a smartphone powerhouse may be numbered. With powerful rivals on the rise and stagnating demand for smartphones globally, Samsung is losing sales and market share.

Global market share and sales for Apple, Huawei and Xiaomi - Samsung’s biggest rivals - rose in the first quarter of this year compared to the previous year. By contrast, Samsung saw its market share inch down from 22.7 percent in the first quarter of 2017 to 22.6 percent in January to March this year. Sales dropped in unit terms by 2.5 percent during the same period.

The market share difference between Samsung and No. 2 Apple is now 7.5 percent, down from 8.3 percent last year, according to consumer electronics research group Strategy Analytics.

Though Samsung’s market share did increase from the previous quarter’s 18 percent, analysts fear that was a temporary boost from the launch of the Galaxy S9 series in March.

“Samsung Electronics may have reclaimed its position as market leader,” read a monthly ICT trend report by the Institute for Information & communication Technology Promotion (IITP), “but it is the only company among the top four phone makers that saw negative growth in both market distribution and sales on-year.”

Sales of Samsung’s newest Galaxy series have not been that great.

“Unit shipments of S9 phones were steady in the first quarter,” said Lee Seung-woo, a researcher at Eugene Investment & Securities, “but they started faltering in the second quarter. At this pace, total S9 phone unit shipments for this year could stop at a little over 30 million, the lowest sales since the Galaxy S3.”

Slow S9 sales persuaded brokerages like Korea Investment & Securities and eBest Investment & Securities to readjust their operating profit forecast for Samsung’s IT & Mobile Communications division, which produces the smartphones. For the second quarter, they now predict operating profit of around 2.25 trillion won ($2.02 billion), down 15 percent from previous estimates.

“The S9 phones are posting sales performance between the S7 and S8 levels,” said a Samsung Electronics spokesman in response to comments about the phones’ underperformance. “We expect sales to increase from next month, as we had postponed some marketing activities due to an auction between mobile carriers for 5G frequency bands.”

LG Electronics is actually fading into irrelevance on the world stage. Though Korea’s second biggest phone maker had climbed to the world’s No. 4 in terms of market share - hitting a high of 4.8 percent in 2013 - that figure tumbled to 3.3 percent in the first quarter. LG’s smartphone business has been in the red for twelve straight quarters.

There are several reasons for Korea’s fading performance in smartphones. First, demand around the world is decreasing. People are replacing smartphones with less frequency, and most people who can afford a smartphone already have one. At this point, phone makers can only increase their sales by stealing customers from other producers rather than attracting first-time users.

Chinese makers like Huawei and Xiaomi - whose on-year sales grew 13.9 and 124.6 percent in the first quarter - are also becoming forces to be reckoned with. Chinese phones now offer high-tech functions comparable to Korean competitors and Apple, often for a fraction of the price.

“Though Korean companies previously used their brand power to set price levels in the industry,” said an industry expert, “Chinese makers have long dragged prices down in Europe and Asia. Now that Korean phone makers have to lower smartphone prices save for premium phones, operating profits are naturally falling.”

With sales at this pace, smartphones may no longer be Korea’s leading export category.

According to data from the Ministry of Science and ICT and Statistics Korea, exports of mobile phones for the first four months of this year were $4.81 billion, a 26 percent fall on-year. This was a 15-year low for the period between January and April. Monthly handset exports have been falling for 25 consecutive months since April 2016 on-year.

“Though export levels won’t continue to fall [for some time] due to the base effect and release of new products,” Chung Hae-sik, a researcher at the IITP, “exports for this year will be lower compared to last year. Korean smartphones need to embark on a two-track strategy to compete with Apple for the high-end phone market, while manufacturing good quality bargain phones that can stand up to Chinese rivals.”

Offering unique features on handsets can be a way to steady or increase sales. The domestic smartphone industry is now placing their hopes on foldable smartphones being developed by Samsung, which are expected to be available from next year.

In a recent report, the KT Economics & Management Research Lab suggested that phone makers manufacture smartphones without bezels, the outside frame of a phone that isn’t screen space, to be more competitive in the market.

“Although a full-screen phone cannot guarantee 100 percent success,” read the report, “it is the most effective way to bring a point of differentiation to smart devices at the moment. If domestic phone makers launch a full-screen smartphone by next year, this will most likely increase sales, allowing Korea to lead the smartphone market until the first half of 2019.”