MMCA sets forth its midterm plans

MMCA sets forth its midterm plans 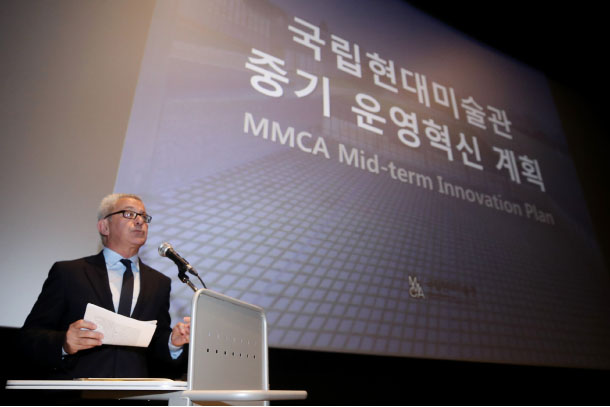 The National Museum of Modern and Contemporary Art (MMCA) on Tuesday said the plan to incorporate the state-run institution, which has been pending for a decade amid fierce clashes, has been virtually nullified by the Culture Ministry. The final decision will be made soon after the ministry’s discussions with other government agencies, the museum added.

Now that uncertainties have reduced, the national museum presents a set of its midterm plans, its director Bartomeu Mari said in a press conference, making clear the museum’s desire to not repeat the chronic problem of Korean state-run art institutions - discontinuing policies and programs depending on a change of its director or presidential administration.

The midterm plans include some new exhibitions, which link severances or fill up holes in Korean art history such as those that shed light on Korean modern photographers and artists who were omitted in the art history books as they defected to North Korea or died too young.

The museum will also continue to hold exhibitions that focus on the Asia region and its relations with Korea. An exhibition developed in collaboration with Japanese and Singaporean museums that features art with heavy sociopolitical context is scheduled for next year. An additional exhibition of still-life paintings from Korea, China and Japan, in which their traditions and Western influences are combined, is scheduled for 2021.

The museum also unveiled a more systematic procedure for collecting new works and plans to strengthen research and publishing projects.

Mari, who faces the end of his three-year term in December as the first-ever foreign director of the national museum, said that he hopes the museum will “go in a similar line,” whether he is allowed to serve a second term or not. “That’s not the question of hope but question of logic,” he added.