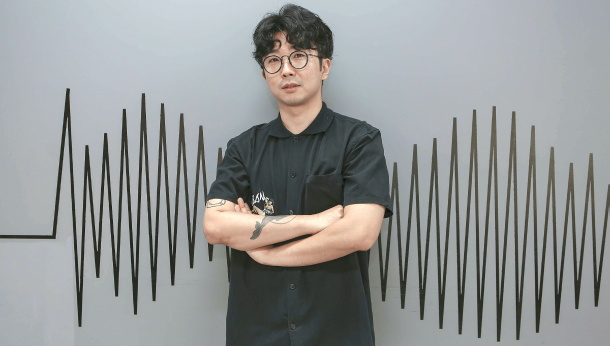 Shin Sang-hoon is YG Entertainment’s merchandise designer and the brains behind many popular items featuring K-pop groups like Winner and Blackpink. [KOCCA]

Along with the rising popularity of K-pop groups like Big Bang, BTS and EXO internationally, the demand for goods featuring the musicians has skyrocketed over the past few years. Shops selling K-pop paraphernalia have become a must-visit for many foreign tourists, who often purchase items in bulk while they visit.

While K-pop goods were originally items as simple as postcards or stickers with faces of various celebrities, the variety of products have vastly increased over the years and even entice non-fans to open their wallets.

YG Entertainment - one of the nation’s major talent agencies and home to some of K-pop’s biggest names, including Big Bang, Winner, iKON and Blackpink - has been at the forefront of developing creative items inspired by the latest trends.

Some of the agency’s most well-received goods are Winner’s diary with a holographic cover and a transparent cross bag featuring the members’ handwriting. Holographic patterns and transparent bags are both hot fashion trends of the year.

A smartphone case featuring the face of comedian Yoo Byung-jae was another major hit for YG. The item became a trend on social media to take photos of the case in front of other faces to make them look like Yoo. Thanks to the product’s popularity, it was spun off into different items, including a sleeping mask.

“Differentiating our goods from those of other talent agencies, and providing fans with creative, useful and affordable items are our primary goal,” said Shin Sang-hoon, a merchandise designer at YG Plus, a subsidiary of YG Entertainment.

As one of the two merchandise designers at YG, all of the goods bearing the group’s names are confirmed by Shin and his colleague before they hit the market. Shin has designed Winner’s ball caps with the boy group’s logo embroidered inside and a seemingly plain t-shirt with the boy band’s handwriting on the tag.

When designing goods, Shin said he often hides the identity of the artists to cater to so-called ordinary people cosplay. Referring to those who hope to hide their passion for their favorite artists, they prefer to carry goods that non-fans would not recognize as K-pop merchandise.

A simple t-shirt with “TCCI” written on the front is something that only fans of Eun Ji-won from the 90’s boy band Sechskies would be able to recognize. Short for “Take Care Cause I Care,” the phrase was famously said by the singer to his fans.

“A [K-pop merchandise] designer’s job is to deliver a story and a message from artists onto products that have value,” said Shin.

To discuss his job and his achievements, Shin sat down for an interview with the Korea JoongAng Daily on June 19. The following are edited excerpts. 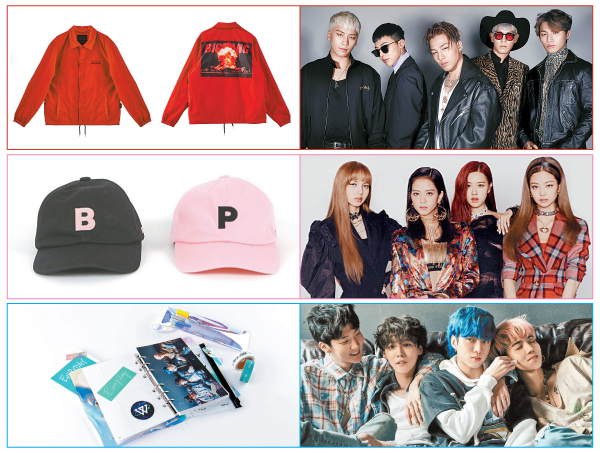 From top to bottom is a Big Bang jacket, Blackpink baseball caps and a Winner holographic diary. [YG ENTERTAINMENT]

Q. Many people have heard of merchandisers and of designers. But what does being a merchandise designer entail?

A. As a merchandise designer, I personally select, produce and put designs onto items that reflect each artist’s distinct characteristics. For inspiration, I keep track of the latest trends on a number of social media platforms.

As a designer, your goal must be to create goods that have significance that goes beyond merely being a product featuring the artists. What do you think K-pop goods should mean to the fans who end up buying them?

Due to the rise of social media use, expectations have risen much higher. Naturally, it has become very challenging to garner a positive response with uncreative designs. Introducing goods with just a simple logo placed on them has become a very old-fashioned way of designing K-pop merchandise. For us, the most important part of designing K-pop goods is to give a special meaning to the products in addition to making them look cool and pretty. Only then can all of us - the artists, the fans and the designers - be fully satisfied with the final outcome.

Unless they’re really dedicated fans, people usually check out K-pop merchandise but don’t open their wallets to purchase them. Do you have any ideas about how to make your products exciting enough so that people would want to buy them?

I do a lot of research on what kinds of things people use in their daily lives and analyze why the items are popular. Then, I mull over ways to blend our artists’ identities into the products we make. Since we do our best not to differentiate between the prices of our products and similar items sold in stores, we hope fans choose our products, which reflect the personalities of their favorite artists.

I believe it is possible to unintentionally attract non-K-pop fans into the world of K-pop through the products you design. Has that ever happened?

Yes definitely. And to my surprise, it has happened several times. While monitoring K-pop fan community web pages, I read some posts by people who said that they bought a certain K-pop good after being attracted to something that his or her friend was using. One writer originally wasn’t interested in the K-pop group, but soon become interested in them after buying the product. I have read these kinds of posts several times, and it makes me feel so fulfilled every time. Though it doesn’t happen often, I believe the fact that it does happen is very encouraging.

K-pop goods are popular among fans both inside and outside of Korea, and many foreign K-pop fans make it a point to stop by K-pop merchandise stores when they visit Korea. How do you cater to their needs?

We sell our goods through international shopping sites like Amazon and Qoo10, so they are available pretty much anywhere. But we can’t deny that goods available online and the ones we sell exclusively to local fans at concerts or fan meet-ups are quite different. We focus on local fans because they react quite sensitively to the limited edition goods we release.

How are local and foreign fans different when it comes to their purchasing habits?

Foreign fans have more aggressive spending power. They’re willing to purchase more costly goods and don’t hesitate to buy products that vividly depict the artists they like. As for local fans, they’re more interested in buying products that reveal less about the K-pop stars they like.

What do you think is the reason for the difference in their attitudes?

I personally think the reason for the difference is that Korean fans feel quite shy about how others see them, in the same way some older fans feel embarrassed about liking younger K-pop stars. But I believe passionately liking someone and acting based on that passion is very meaningful.

With the increasing popularity of K-pop, interest in becoming a K-pop merchandise designer has also grown. As someone who often gives lectures to designers, can you also sense that more people are becoming interested in your career?

Yes definitely, and I feel more responsible about the change. In the past, K-pop goods designers were often less acknowledged in the industry because their jobs were often perceived to be trivial. But over the past few years, people’s perceptions of K-pop merchandise designers have dramatically changed, which I believe is partly due to the tremendous effort we put into making creative goods.

What are some qualities of a good K-pop merchandise designer?

My goal is to introduce goods that even non-K-pop fans would want to buy. As a designer, I want to create products that exceed the expectations of fans and artists. Satisfying artists doesn’t necessarily lead to satisfying fans. Everything that has hit the market has been approved by the artists, but some of them were criticized and didn’t do well because the tastes of the artists and their fans often differ. So another important quality to become a good K-pop designer is the ability to mediate between the two.