For next trip, Moon heads south

For next trip, Moon heads south 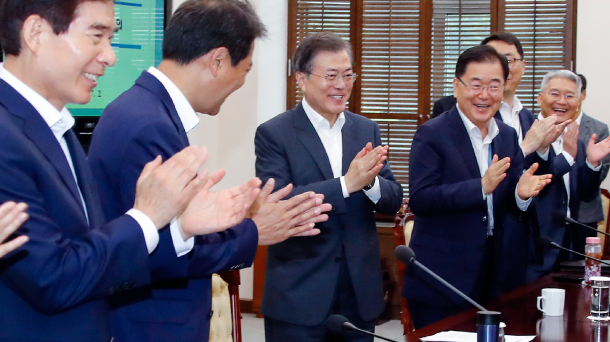 Presidential aides applaud at a meeting in the Blue House on Monday after President Moon Jae-in, third from left, returned to work. Moon took four days off to rest from a cold caused by fatigue from a recent state visit to Russia. [YONHAP]

President Moon Jae-in will travel to India and Singapore for six days starting on Sunday in an effort to expand Korea’s economic cooperation with South and Southeast Asian nations as part of his “New Southern Policy,” the Blue House said on Monday.

The trip to India from July 8 to 11 will be a state visit at the invitation of Prime Minister Narendra Modi, said Kim Eui-kyeom, the Blue House spokesman. A state visit is the highest level offered to visiting foreign leaders and involves more pomp and protocol. Lesser forms are official visits, working visits and private visits.

“India is a nation on a fast ascent with a fast-growing economy,” Kim said, adding that the world’s second-most populous country was a “core partner in the Moon government’s New Southern Policy.”

The New Southern Policy, which Moon unveiled last November during his visit to Indonesia, aims to increase Korea’s economic cooperation with Southeast Asian nations and India, a country of 1.3 billion. The belief is that the region offers a big market for Korea and will help reduce the country’s dependence on trade with China and the United States. The aim of Moon’s New Southern Policy is to double its trade volume with the 10 member states of the Association of Southeast Asian Nations (Asean) by 2020.

During his four days in India, Moon will meet with President Ram Nath Kovind and Prime Minister Modi and discuss ways to further develop bilateral economic ties. His state visit comes as the two nations celebrate their 45th anniversary of diplomatic ties. India has become an “important partner to work with in the area of safeguarding peace on the global level and on the Korean Peninsula,” the Blue House said.

After India, Moon will travel to Singapore, which hosted the historic summit between the North Korean and U.S. leaders on June 12. For South Korea, though, the island nation of 5.6 million is an economic boon. Singapore is the largest construction market for South Korean firms and the country’s second-largest trading partner among the 10 Asean countries.

During his three-day state visit there, Moon will meet with President Halimah Yacob and Prime Minister Lee Hsien Loong. He will then return to South Korea on July 13.

Moon’s visits to India and Singapore will come just a week after he recovered from a cold caused by fatigue from his last overseas trip. The president was advised to take a few days off after returning from a three-day state visit to Russia in June to promote his New Northern Policy.

After taking Thursday, Friday and the weekend off, Moon returned to work on Monday in a more jocular mood and presided over a meeting of his senior aides.

“I feel a little embarrassed that I caught a cold because of a heavy workload,” Moon remarked, “even as I have been calling on the Korean people to end a society characterized by overworking.”

One of the president’s core economic policies is reducing the country’s notoriously long hours to improve work-life balance and encourage companies to hire more hands. On Sunday, a new regulation went into effect that limits the workweek to 52 hours, down from 68.