Shin’s future is not guaranteed

Shin’s future is not guaranteed 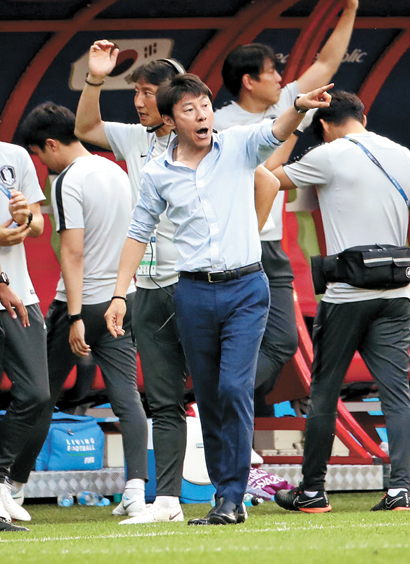 The Korea Football Association (KFA) announced on Thursday that head coach Shin Tae-yong will have to compete with other possible candidates to keep his position.

“We will regard Shin Tae-yong as one of the candidates, and he’ll be up against other candidates being considered,” said Kim Pan-gon, the head of the national team coach appointment committee at the KFA.

Shin was appointed as the head coach in July 2017 after Uli Stielike was fired due to the national team’s poor results in the final Asian qualifying round for the 2018 World Cup. Shin’s contract was only for a year, until the end of the 2018 FIFA World Cup in Russia, July 2018.

Though Shin had no experience coaching the senior national football team, he had an impressive track record at international events, leading Korea to the round of 16 at the U-20 FIFA World Cup in 2017 and leading the U-23 team to the quarterfinals at the 2016 Rio Olympics.

Despite the abrupt decision to name Shin as head coach, he was still responsible for ensuring Korea’s ninth consecutive World Cup appearance by finishing the last two matches against Iran and Uzbekistan with scoreless draws. Shin earned the ire of fans last year when Korea lost its friendly matches against Russia and Morocco.

But Shin bounced back. He led Korea to win the East Asian Football Federation E-1 Football Championship at Ajinomoto Stadium in Tokyo in December, 2017, finishing ahead of Japan to win the tournament.

Though the tournament was only between four countries - South Korea, North Korea, China and Japan - the win proved Shin’s coaching ability.

At the 2018 FIFA World Cup in Russia, Korea was paired in Group F with defending champion Germany, Sweden and Mexico. Despite getting assigned in one of the toughest pools, Shin remained confident, saying that the team’s goal was to advance to the knockout stage.

Sadly, that wasn’t to be. Korea lost its opening game 1-0 to Sweden, following up with a 2-1 loss to Mexico. Korea took a surprise 2-0 victory against Germany but still failed to advance to the knockout stage as Sweden won its last group match 3-0 against Mexico.

“I understand people’s criticism of Shin’s experiment, but his spirit of challenge and experience are denounced too much,” said Chung Mong-gyu, the chief of KFA.

Though Shin failed to reach the round of 16, Chung still complimented his role prior to the KFA meeting on Thursday, saying that he’d done his job in producing some talented players.

“He did find a talented defender like Kim Min-jae and played players like Jo Hyeon-woo, Lee Seung-woo, Yun Young-sung and Ju Se-jong to expand options in the national team,” Chung said. “Out victory against Germany is really an achievement, but it’s important for us to win with our competitiveness on the pitch, not just with our fighting spirit.”

Prior to the meeting on Thursday, Luiz Felipe Scolari’s name was brought up as a possible candidate for head coach. The KFA will hold further meetings in the near future to narrow down the possible candidates to 10 and start contacting them. Then, the KFA will review their portfolios, including Shin, before making their final decision for the new head coach of the Korean national football team.

“[We are] well aware of what the national team players are looking for,” said Kim. “We’ll bring in a head coach who has a clear philosophy so we can make a stronger national team.”