Koreas are 1-1 in basketball friendlies

Koreas are 1-1 in basketball friendlies 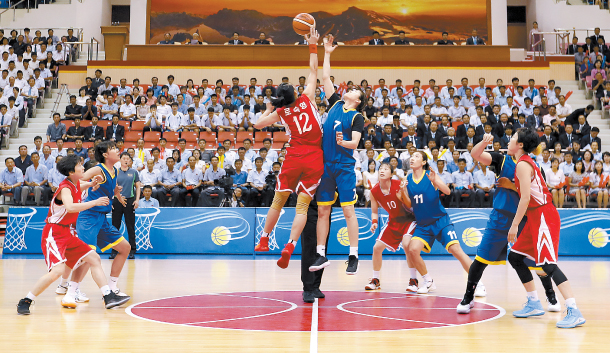 Female basketball players from both Koreas compete against each other in Pyongyang Thursday as a North Korean audience looks on. The South beat the North 81-74. [YONHAP]

The South Korean women’s basketball team beat the North 81-74 in Pyongyang on Thursday, while the North beat the South 82-70 in the men’s game.

The two basketball games are part of a slew of cultural and athletic events between the two Koreas after their leaders agreed to boost cooperation in the spirit of “rejuvenating a sense of national reconciliation and unity” during their summit in April.

On Wednesday, the two Koreas swapped players and formed two inter-Korean teams that played against each other. One was called Peace, the other was called Prosperity.

All games were held at the Ryugyong Jong Ju Yong Gymnasium in Pyongyang, and according to pool reports, the 12,000-seat gym was fully packed.

North Korean leader Kim Jong-un, an avid basketball fan, did not attend any of the games. There was wide speculation that he might at least drop by because he was the one who initially floated the idea of friendly basketball games during his summit with South Korean President Moon Jae-in.

Kim Yong-chol, vice chairman of the North Korean Workers’ Party Central Committee and director of the committee’s United Front Department, which is responsible for inter-Korean relations, said Thursday morning that Kim Jong-un would probably not be able to attend the games later that day because he was in the suburbs for a so-called “field guidance.”

The information was relayed during a meeting with South Korean Unification Minister Cho Myoung-gyon at the Koryo Hotel, where the South Korean delegation was staying.

A field guidance refers to the North Korean leader’s appearance at a site, usually one related to the military, economy or industry, during which he gives directives and pep talks.

The meeting between Cho and Kim Yong-chol lasted from 10:20 a.m. to 11:10 a.m., according to pool reports. Kim Jong-un reportedly watched the basketball games “through television” on Wednesday, though the games were not aired on North Korea’s official state media.

Kim Yong-chol said he was advised by Kim Jong-un to meet Cho, briefly speak with him and “ask for his understanding” on why he couldn’t make it to the games.

Kim Yong-chol told Cho that Kim Jong-un extended his gratitude to President Moon for cooperating on the basketball games, adding that North-South relations would continue to develop on a “good path” if the “current flow continues.”

On the imminent visit of U.S. Secretary of State Mike Pompeo to Pyongyang, Kim Yong-chol told Cho that he was scheduled to meet Pompeo today and said he would “negotiate well with the United States.”

Cho later told pool reporters on Thursday that there were no plans to hold a three-way meeting involving both Koreas and the United States.

A South Korean announcer who emceed the basketball games said he prepared 30 K-pop songs to play for the audience, but North Korean officials blocked him from playing them without giving an explanation.

The 101-member South Korean delegation, which includes basketball players, government officials and journalists, is scheduled to land at Seoul Air Base in Seongnam, Gyeonggi, at around 5 p.m. today.