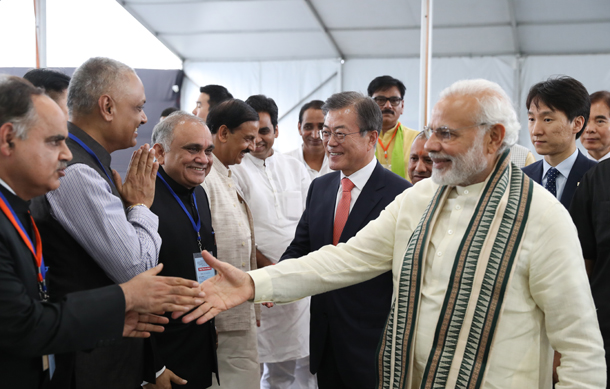 Western media often call India “the world’s biggest democracy.” Of course, by population it is. India, with a population of 1.35 billion, gets such high praise over China with 1.4 billion people because of its democracy. Narendra Modi, the Indian prime minister since 2014, advocates 3D as India’s advantages for foreign investment. 3D refers to demographic dividend, democracy and demand for goods and services.

Modi’s economic policy, or Modinomics, takes a business-friendly direction, aggressively attracting foreign investment, lifting regulations and expanding investment on infrastructure. The core is his “Made-in-India” policy, nurturing the manufacturing sector to expand jobs. Foreign investors used to struggle with the different taxes on products and services for each state in India. Last year, Modi introduced GST — a unified indirect tax system for all states throughout India — to remove the obstacle for foreign investors. The Indian economy had struggled during the global financial crisis, but under the Modi government the country has been making 7 percent growth.

The Indian economy has been growing faster than China’s since 2015. Its size surpassed France last year, becoming the sixth largest economy in the world.

Financial industries have produced rosy reports on India. However, the limits of Modinomics are also noteworthy. Not much progress has been made on labor reforms toward a more flexible workforce and for the law to make it easier for private companies to expropriate lands due to the opposition of labor unions and farmers.

More seriously, Indian women’s participation in economic activities is still low. The Economist recently addressed the issue in a cover story. The employment rate of Indian women is a mere 26 percent, largely due to conservative customs. When the female employment rate rises to that of men, the Indian economy will be 27 percent richer, international economists estimate.

Many businessmen accompanied President Moon Jae-in on his state-visit to India. A new era is to begin based on economic cooperation with India to reduce the Korean economy’s dependency on China. It would have been better if the feminist protestors at Hyehwa Station had been invited. If they had banded together with the Indian women suppressed by social customs and criticized the culture of gender discrimination in India.

By any standards, they went too far by using the name of a late male group leader to criticize the president. Neither a policy nor a feminist movement can succeed if it fails to win the public’s sympathy.