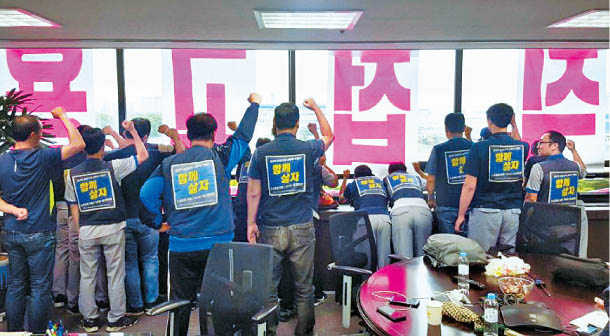 GM Korea contractors occupy company CEO Kaher Kazem’s office in Bupyeong, Incheon. The contractors have taken over his office since Monday and are asking for direct employment and additional compensation for fired workers. [YONHAP]

While GM Korea is still trying to get back on its feet after reaching the verge of collapse earlier this year, it’s facing renewed challenges from its unhappy contractors and the Ministry of Labor.

GM Korea CEO Kaher Kazem’s office has been occupied by contractors at the company’s Gunsan, Bupyeong and Changwon factories since Monday. They are asking to be hired directly by the company, as well as extra compensation for workers who were fired.

The workers asked for a direct meeting with Kazem, but management ignored the request. The workers were still there as of Wednesday.

“If Kazem talks with us directly, we will disband,” said the members of GM Korea’s contractor union.

The contractors are technically not employees of GM Korea.

Some of the car manufacturing tasks are done by workers directly employed by the carmaker. But other jobs, like installing windows and light switches, are done by companies contracted by manufacturers.

While some of these tasks are done at contractors’ own factories, some jobs have to be done inside GM Korea factories due to logistical complications.

Controversy over the differentiation between contractors and regular workers began in 2006, when regular workers at GM Korea and contractors worked at the same factory and performed very similar tasks. The Ministry of Employment and Labor inspected the site and indicted GM Korea for illegal secondment of employees.

Since then, GM Korea reorganized its factory’s assembly lines and tasks assigned to workers. The company made sure that operations done by the contractors and regular workers were separated as well, and made sure their working area didn’t overlap if they are working in the same area. The ministry later approved the changes.

The ministry’s stance, however, changed when the Moon Jae-in government started to encourage companies to shift their irregular workforce into regular employees.

On May 28, the Labor Ministry concluded that some 774 contractors at GM Korea’s Changwon factory were illegal seconded, and ordered the auto company to shift them into regular workers. It is only a matter of time before the ministry inspects GM Korea’s Bupyeong factory in Incheon, and it could accuse the company of illegal secondment of 1,900 employees.

The working environment at GM Korea and contractor-related regulations barely changed since the last inspection of the company in 2013, which it passed.

In an interview on Tuesday, an official from the Labor Ministry who inspected GM Korea’s factories said he did not believe GM Korea broke the law.

“In cases of illegal secondment, there are clear standards, and I have been in this area for a long time. I am sure that GM Korea didn’t commit illegal secondment after we caught it the first time,” the official said.

If the ministry’s order to convert the contractors to regular workers goes through, GM Korea will have to endure more financial pressure over labor costs. The company is currently struggling to reduce its massive debts.

GM Korea received a total of 2,700 voluntary retirements to reduce costs over the past four months. If the company directly hires contractors, it would be equivalent to rehiring 70 percent of the retirees.

Most of the voluntary retirees were white collar workers. According to GM Korea, there is no room left in its factory to receive all the blue-collar contractors.

“Korea’s regulation limits worker secondment to 26 tasks, which is too few,” said an official from the Korea Employers Federation. “If the number of tasks gets expanded, like Germany and the United States, controversy over illegal secondment will subside.”