A face-lift for Yeouido, Yongsan

A face-lift for Yeouido, Yongsan 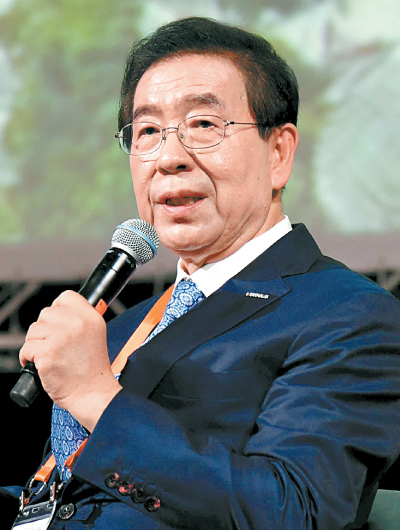 Seoul Mayor Park Won-soon announces plans to develop two areas of the Korean capital during a news conference in Singapore on Tuesday. [YONHAP]

Seoul Mayor Park Won-soon announced two ambitious plans on Tuesday to transform Yeouido, long limited by height restrictions, into a mixed residential-commercial island and build a convention center above the railroad tracks between Seoul Station and Yongsan Station in a project modeled after the Paris Rive Gauche.

Park made the announcement during a visit to Singapore to receive the Lee Kuan Yew World City Prize, which honors cities for developing green and pedestrian-friendly infrastructure.

“I plan to develop the entire Yeouido area by preserving parks and spaces for community activities and raising the height of buildings overall,” Park said, “and I plan to build a commercial and tourism complex above the railroad tracks between Seoul Station and Yongsan Station.”

The Seoul Metropolitan Government said it would reveal more detailed plans in September.

On Yeouido, an island in western Seoul that houses the National Assembly and the headquarters of several financial institutions, the height limit is 35 floors for residential buildings and 50 for commercial ones.

“The plan is to transform all of Yeouido into a commercial and residential space,” Park said. The Seoul Metropolitan Government plans to review raising the height limit on residential buildings to allow more apartments to be built on Yeouido.

In central Seoul, the plan is to build a commercial complex and convention center above the tracks between Seoul Station and Yongsan Station. The mayor hopes the space will attract large tour groups dealing in MICE - meetings, incentives, conventions and exhibitions.

“It will be similar to the Paris Rive Gauche,” Park said, “where a commercial complex above railroad tracks invited further establishment of university campuses, libraries and hospitals in the area.”

An official in the Seoul Metropolitan Government said it would negotiate with private developers in Yeouido and Korail, the nation’s rail operator, on the budget for both projects.

Ahn Chang-mo, a professor of architecture at Kyonggi University, welcomed the plan.

“Yeouido connects Gangnam and Gangbuk,” he said, referring to areas north and south of the river. “It is a geographically important location. Developing Yeouido will improve the north-south exchange of people, goods and ideas in Seoul.”

Kim Do-nyun, a professor of architecture at Sungkyunkwan University, agreed.

“If Yeouido is transformed into a largely commercial city, it may upgrade the whole of Seoul,” he said.

The Korean capital beat 99 cities this year to receive the Lee Kuan Yew World City Prize. Singapore’s Urban Redevelopment Authority lauded Seoul for “turning itself around from a highly bureaucratic city into a vibrant and inclusive city through strategies such as citizen engagement, creative urban rejuvenation, and creating pedestrian-friendly spaces.”

Most notably, it referred to the city’s reclamation of spaces formerly used by cars, such as a highway that used to run over what is now Cheonggyecheon, a stream in central Seoul popular with tourists, and an overpass that now houses a public park.