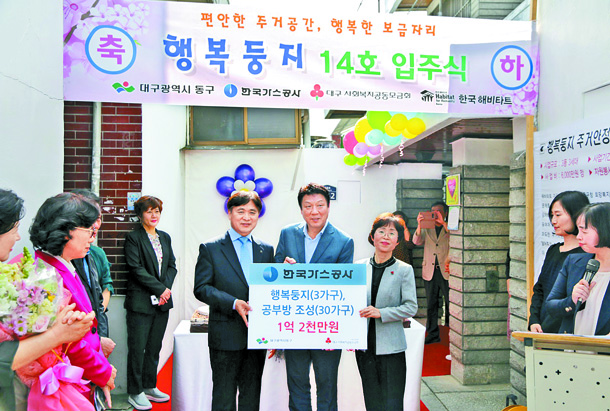 Kogas converted empty and deserted houses in Daegu, remodeled them and then offered them for free to underprivileged people. [KOGAS]

The Korea Gas Corporation (Kogas) is promoting activities to expand culture sharing, foster students, improve welfare and produce jobs as part of its social contribution drive for the next year.

Kogas has summed up its social contribution direction as “Contributing to the development of the public interest and community by guiding social values.” Although the corporation has reduced its overall budget for social contribution by 16 percent this year, it has increased the funds available in Daegu by 6 percent, trying to put the focus on city-based projects to ensure balance. Last year’s social contribution budget was heavily influenced by the PyeongChang Olympics.

In the past, economic groups, including social enterprises and cooperative unions, have been fostered and architecture academies began operations to teach skills and provide jobs. In 2017, two academy graduates formed a social economic group and founded a social union called “Friends in the Street.”

A number of companies also took part in the thermal efficiency improvement project to contribute to the development of social organization.

Scholarships for university and high school students are also being offered alongside study rooms for underprivileged young people. A total of 108 scholarships for university students will be offered this year. Projects to provide equipment for the rehabilitation and support of children with incurable diseases will continue along with education support projects. Businesses regarding medical and academic support for underprivileged children will also be expanded.

The company plans to expand its Onnuri volunteer group and culture sharing by encouraging more employees to contribute to the Onnuri Fund.