The politics of retreating

The politics of retreating 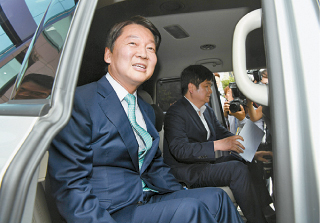 KANG MIN-SEOK
The author is an editorial writer of the JoongAng Ilbo.

It is said that one rich man can bring down three villages. As the ruling party enjoyed a landslide victory in the local election, three opposition leaders were vanquished. Former chairman of the Bareunmirae Party Ahn Cheol-soo said on July 13 that he would leave politics. He plans to head for Germany.

Former leader of the Liberty Korea Party Hong Jun-pyo has already left for the United States. Yoo Seung-min of the Bareunmirae Party is laying low. They all have made exits together. But they don’t mean they are leaving politics forever. After a brief hiatus, they pledge to “return in a swirl of dust.”

There are different styles of political hiatuses. Some stay in seclusion, while others travel abroad. Others declare political retirement. Politicians have used their own combinations of these three elements. Kim Jong-pil is known for living his life in seclusion. In 1968, he was forced by Park Chung Hee to leave the Republican Party and spent his time playing the game of go. When he left the country, he famously said that his departure was “half willing and half not.” However, he did not declare his retirement from politics.

Kim Dae-jung declared his retirement as he left. While he retracted his words later, his retirement, overseas stay and return to politics became a model that many others followed.

Sohn Hak-kyu struggled more than Kim Jong-pil and Kim Dae-jung. The day after he lost a by-election on July 30, 2014, he announced retirement from politics and went up to Mt. Mandeok in Gangjin, South Jeolla. 811 days later, on October 20, 2016, he said he was returning to politics as “Mt. Mandeok told me to leave.” Upon losing the general election in 2008, he also stayed in Chuncheon, Gangwon, and raised chickens. He was there for 25 months. Considering the ordeal he went through, he hasn’t made much of a mark on politics since then.

President Moon Jae-in also lived in seclusion for a while. Instead of making a show of leaving for another country or going into the mountains, he quietly stayed in his residence in Yangsan, South Gyeongsang. One day, I asked one of his aides about his whereabouts. I was told he was at a protest against the construction of a transmission tower in Miryang. His seclusion actually meant leaving the political scene to be with the people.

No one knows when and how Ahn, Hong and Yoo will return. It is not easy for a politician to be forgotten. They should be patient, like Jiang Taigong waiting for King Wen of Zhou on the bank of the Wei River. Avoiding politics is also a political move.