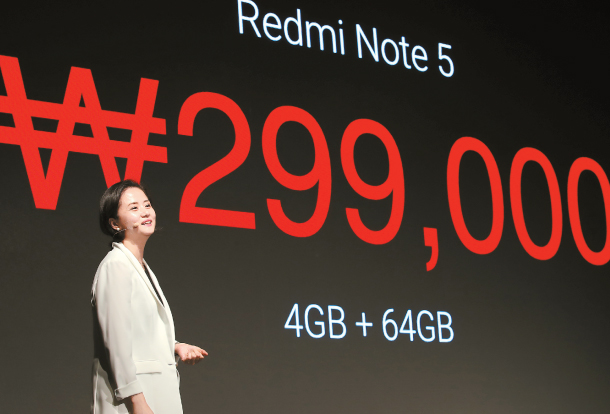 The cost-effective phone, priced at 299,000 won ($265), is the first Xiaomi device launched nationwide through Korean mobile carriers SK Telecom and KT. Unlocked Xiaomi phones have previously been available through other retail channels in Korea.

Redmi Note 5’s greatest selling point is its cheap price tag. While the phone already costs about a third of the price of Samsung’s Galaxy S or Note series phones or Apple’s iPhones, SK Telecom and KT are offering discounts of up to 200,000 won depending on the phone plans users subscribe to.

That means that some customers will be able to pick up the phone for as little as 100,000 won. 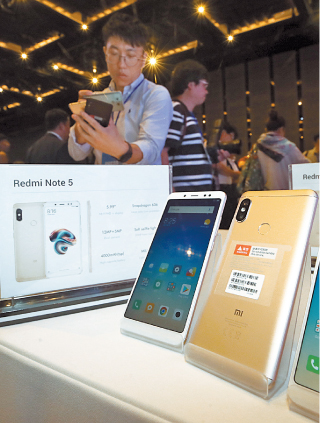 But the Redmi Note 5’s cheap price tag doesn’t mean Xiaomi has cut back on the features.

For enhanced selfie mode, the phone has a 13-megapixel front-facing camera. G-mobi, the Korean distributor of Xiaomi products, said that artificial intelligence has been applied to the camera so it can blur the background to focus on people during a launch event held Monday in Seoul.

G-mobi also emphasized the beautify 4.0 feature of the camera, which can add effects to peoples’ faces by recognizing each part of the face such as dark circles, nose, eyes and even freckles. The feature enables users to easily fix their looks without editing the photo through special apps or programs.

Jung Seung-hee, CEO of G-mobi Korea, said the Redmi Note 5 has been gaining better-than-expected feedback during the presales period that began from July 12. The phone is also sold online by CJ and Hi-Mart. Jung did not disclose exact sales data.

She also declined to comment on an exact sales target for the phone, only saying that the goal for now is to safely land Xiaomi as a smartphone brand in Korea.

When asked whether Xiaomi plans to establish its own retail shop in Korea, Jung said that is highly desired and a plan is being considered, but the low margin on Xiaomi products makes it a difficult decision.

With the launch, eyes are now on how much market share the phone can take in Korea, the home turf of smartphone giants Samsung Electronics and LG Electronics where non-Korean branded phones have rarely survived, with the exception of Apple’s iPhone.

According to market tracker Strategy Analytics, Samsung phones have accounted for 65.3 percent of the local smartphone market in the first quarter, followed by Apple with 16.7 percent and LG at 12.2 percent. Other foreign brands are struggling to even achieve a five percent market share.