National Museum’s hidden side : Stored treasures can be viewed by anyone

National Museum’s hidden side : Stored treasures can be viewed by anyone 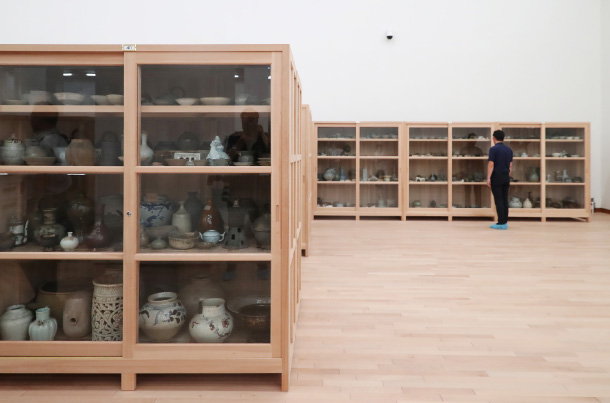 Museum storage doesn’t interest the museum-going public very much, who imagine dark basements with minor treasures, dust, cobwebs and hopefully good security. Although it’s usually the last space the public will ever see, it’s one of the most important parts of the management of a museum. 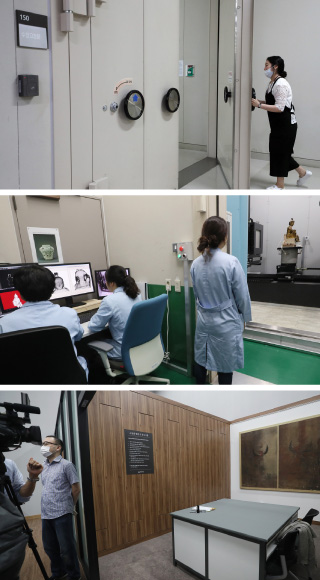 From top: The National Museum of Korea in central Seoul revealed its storage area for the first time in 15 years on Tuesday; a museum official opens the vault door to the storage area; museum researchers conduct a CT scan on a statue of Buddha; a renovated Study Room can be used by anyone to get a closer look at national treasures. [JOONGANG ILBO, YONHAP]

The National Museum of Korea in central Seoul opened up its most obscure section to reporters on Tuesday and announced some new uses for it. According to the museum, it was the first time any outsider was given a glimpse of the storage rooms since the museum was relocated to the current site in Yongsan District, central Seoul, in 2005.

On Tuesday morning, a group of local reporters were given shoe covers prior to going inside the museum’s storage area - to make sure they didn’t bring dirt and dust inside. When everyone was ready, a museum official opened a large vault-like door, ushering the reporters into a bright room lined with wood framed glass cabinets. Inside were displays of hundreds of ceramics, some inside boxes, some wrapped and some simply sitting bare on the shelves. The reporters were inside Storage No. 3, home to a good part of the museum’s ceramics collection.

The museum has 21 storage rooms housing about 200,000 items. Different types of items are stored in different rooms, according to Park Jin-woo, head manager of the Relics Management Department of the museum, to make sure they are kept at exactly the right temperature and with the right humidity.

“Sensitive relics, like paper and metals, have to be really closely watched as the wrong level humidity can lead them to deteriorate,” he said. According to Park, about 80 percent of the museum’s storage is full, and the museum is planning to expand the space by adding an additional floor to four of the rooms.

“When we constructed the storage area, we designed the ceilings to be high to make sure we could install a second floor if necessary,” he added.

Although the public can’t access the storage area, they can get a closer look at items not on permanent display in the museum’s Study Room, which is located next to the storage area. Early this year, the museum renovated the Study Room to accommodate more people.

“Before the renovation, the study room was so small that only scholars and researchers accessed it,” said Cheon Ju-yeon, a researcher at the museum. “But since the reopening, more members of the public have been coming in and we’ve seen a 100 percent increase in the number of visitors to this section this year.”

Surprisingly, any member of the public can ask to see items not on permanent display in the Study Room. 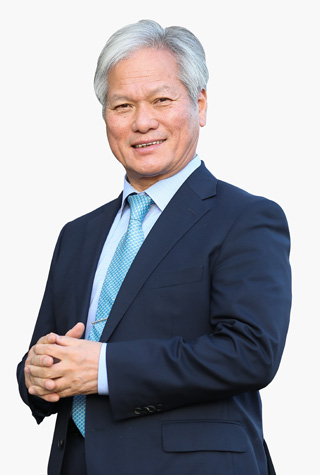 To do so, visitors must make an appointment via eMuseum (www.emuseum.go.kr) and list the items they wish to examine up close and personal. Even national treasures can be taken out from storage upon request. For delicate and important items, such as paintings, a museum official will stand next to the visitor to give careful guidance. “Each visitor will be given a mask and gloves so that they don’t damage valuable relics,” said Cheon. A maximum of three hours is allowed per visit.

Reporters were also taken to the Conservation Science Division, “which is similar to a hospital,” said Yoo Hye-sun, head manager of the division. “We just purchased a CT machine last year and began using it this year to do what we call medical check-ups for all the relics in the museum.”

Tuesday marked the one-year anniversary of director general Bae Ki-dong’s appointment. Bae told reporters the museum has been expanding its collection as well as adopting new technologies to make sure the valuable relics are maintained, and allowing the public better access to the museum.

“Korea is one of the most digitalized countries, but we were quite slow in adopting technologies, like a CT scanner,” Bae said. “We’ll make sure we don’t fall behind, but pave a future for the museum by completing the digitization of our content and adopting various new technologies.”