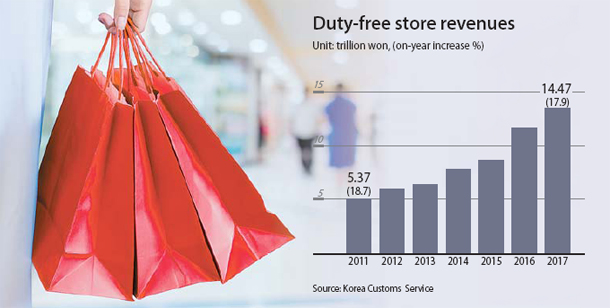 Korean duty-free shops are reviving their once-stagnant sales, with Lotte, Shilla and Shinsegae leading the turnaround.

According to the Korea Customs Service on Saturday, duty-free sales in the first half of the year reached 9.1994 trillion won ($8.17 billion), up 38 percent from the same period last year.

If the trend continues in the second half of this year, sales at duty-free shops will likely rise by 30 percent from last year’s 14.47 trillion won.

Shinsegae Duty Free said on Tuesday that its daily average sales reached 1.7 billion won after the opening of its Gangnam branch in southern Seoul on July 18, far exceeding the company’s sales expectations of 1 billion won a day.

“Our goal is to reach 180 billion won by the end of this year, and 500 billion during our first year of operation,” said Ahn Joo-yeon, a public relations manager for Shinsegae Duty Free. “We have a good start.”

If sales at the company’s Gangnam branch continue at this pace, they will reach about 250 billion won this year.

Chinese consumers made up about 90 percent of the foreign shoppers at Shinsegae Duty Free’s Gangnam branch. 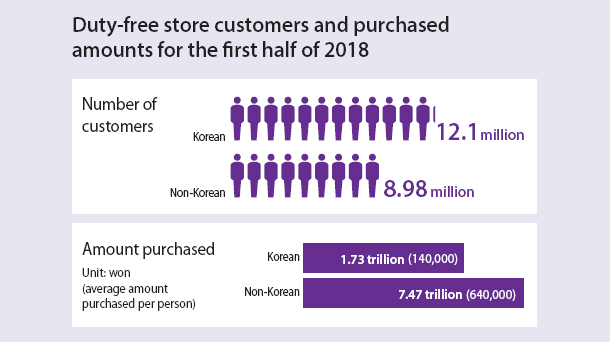 Shinsegae estimates it will take in about 300 billion won in sales between this August and December.

Shinsegae’s Terminal 2 Duty Free Shop, which opened early this year, is expected to bring in about 200 billion won in sales this year.

“Total sales are expected to increase from 1.8 trillion won last year to around 3 trillion won this year,” a Shinsegae Duty Free official said.

Shinsegae, once at the bottom of the Korean duty-free trinity, increased its market share this year.

Industry experts predict that Shinsegae will take about 20 percent of the Korean duty-free market this year, up from 13 percent last year.

Shilla Duty Free was behind Shinsegae in its bid for the Incheon Airport duty-free slots last month, but Shilla’s operating profit hasn’t taken any hits.

Shilla’s duty-free shops in the Hong Kong, Singapore and Incheon airports continue draw in sales, and 42.6 percent of the company’s sales in the first quarter came from the airport shops.

Shilla Duty Free brought in about 4 trillion won in sales last year, accounting for 27 percent of the market. It’s expected to have a similar market share this year.

Lotte handed over three out of its four duty-free locations at Incheon International Airport Terminal 1 to Shinsegae this year and didn’t open any new locations.

If Lotte Duty Free had operated all of its Terminal 1 locations until the end of its contract in 2020, it likely would have suffered losses. Lotte’s most valuable Terminal 1 duty-free section, the liquor and tobacco area, is still open.

According to an official at Lotte Duty Free, sales at the duty-free store’s location in Sogong-dong, central Seoul, are expected to reach 4 trillion won this year, up 30 percent from 3.169 trillion won last year.

Lotte, the world’s second-largest duty-free company after Dufry in Switzerland, has expanded its overseas duty-free shops, opening its seventh location in Nha Trang Airport in Vietnam at the end of last month.

It also plans to bid on space in Taiwan’s Taoyuan Airport this month. Lotte is also in the process of acquiring JR Duty Free, an Australian company.

Last year, Lotte Duty Free raked in 6.2 trillion won in sales, 150 billion of which were made overseas.