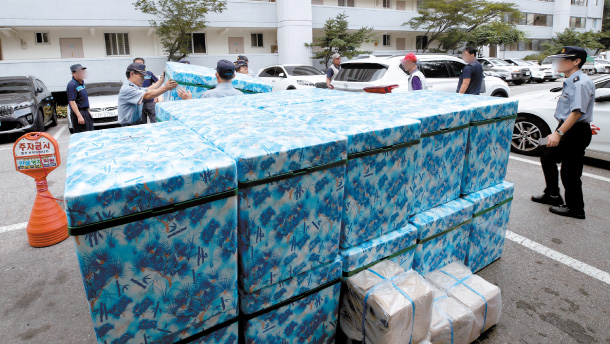 Apartment security guards carry ice boxes to distribute to each household after power went out due to an electric transformer’s overload at an apartment in Nowon District in northern Seoul on Wednesday. [YONHAP]

The heat wave continues to take its toll.

According to the Korea Centers for Disease Control and Prevention, 14 people have died of the heat as of Monday, adding five from last week. About 1,303 Koreans have fallen ill, nearly 300 more patients than reported on Saturday.

Along with human casualties, the number of animals falling victim to the heat wave showed a drastic spike in the past few days. 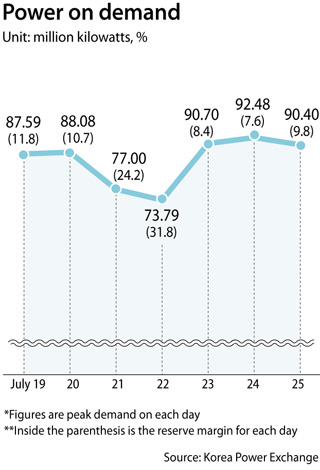 According to the Ministry of Agriculture, Food and Rural Affairs Wednesday, nearly 750,000 animals were reportedly killed by the heat on Tuesday alone. The data shows that, for the week before Tuesday, the daily average of animal deaths reported to authorities stood at about 140,000.

An official from the Agriculture Ministry explained that, while it’s difficult to say all those animals were killed in a single day because not all farmers report deaths of livestock on the same day, it shows the damage being done by the heat.

In total, about 2.17 million animals died as of Wednesday morning, 20 percent more than the same period a year ago. Financially, this caused about 11.9 billion won ($10.57 million) in estimated damages to local farmers.

“Unless we see an unexpected variable in the weather, such as a typhoon, the heat wave is likely to stay until early August, causing more damage,” said the ministry official.

The scorching sun is also pushing up electricity demand to an unprecedented level.

The institution projected that the reserve margin, the amount of electricity being generated that is not being used, will fall to 6.8 percent. On Tuesday, the margin fell to about 7.6 percent, the first time in two years that it has fallen to the seven-percent range.

The electricity supply is considered stable when the margin is above 10 percent.

The actual demand fell slightly short of the prediction.

As of 5 p.m. Wednesday, the power demand in the country was 90.40 million kilowatts and the reserve margin was at 9.8 percent.

Although the heat wave has raised worries about blackouts, government officials say the situation is still manageable.

“The 6.3-million kilowatts of reserve electricity estimated as available for today was about twice the amount we had in the summer of 2012 when the country experienced a severe power shortage,” said Paik Un-gyu, minister of trade, industry and energy, in a press briefing on Wednesday at the Sejong government complex. “Even in 1994, one of the hottest summers the country has ever seen, the reserve margin fell to 2.8 percent.”

Paik explained that the ministry could call in as much as 6.8 million kilowatts of reserve energy through additional sources such as emergency power generators owned by public companies and government agencies across the country.

“Having too much electricity as reserves is not economical given all the cost necessary to generate and store that energy,” Paik said. “This could also be a factor that pushes up utility bills for the public.”

But despite the government’s sanguinity, some apartment complexes in Seoul - particularly older ones - experienced power outages in the past couple of days.

Some 1,800 apartment units in Jang-mi Apartment complex in Nowon District, northern Seoul, which was built nearly three decades ago, lost electricity on Tuesday evening, according to the Korea Electric Power Corporation, a state-run utility. An apartment complex in Daechi-dong, southern Seoul, also experienced a blackout for about two hours on Wednesday.

The energy company explained that most of the power outages were due to malfunctions of electrical devices such as transformers at those complexes, which were unable to handle the amount of power demand.