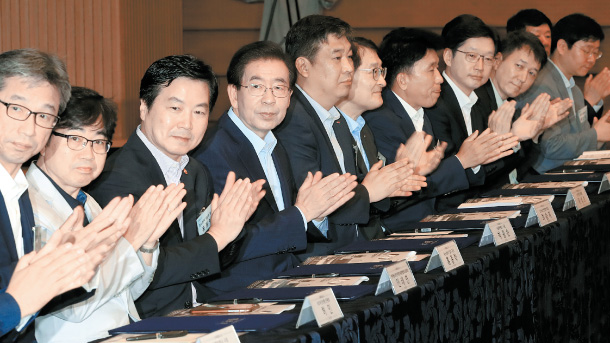 Seoul Mayor Park Won-soon, fourth from left, and Hong Jong-hak, minister of SMEs and start-ups, third from left, applaud at a ceremony to launch the pilot run of a no-fee mobile payment system for small businesses at the headquarters of the Korean Chamber of Commerce and Industry in central Seoul on Wednesday. [YONHAP]

The Seoul city government will pilot a mobile payment system later this year that allows no-fee transactions between customers and small businesses, Mayor Park Won-soon said in a statement on Wednesday.

“There is no hope for our economy if the self-employed, who make 30 percent of the country’s revenue, do not do well,” Park said. “The new payment app should help the self-employed and small business owners because they will not have to pay transaction fees.”

Most businesses have to pay credit card companies a fee whenever a customer uses plastic to pay for goods and services. Park, who was re-elected to a third term last month, pledged in his campaign to create a feeless mobile payment system. The Seoul government estimates that there are about 660,000 small business owners in the city.

The system will allow customers to make direct transfers from their bank account to merchants’ accounts. It will be accessible as an additional feature on five existing mobile payment apps: Kakao Pay, Naver Pay, Payco, Korea Smart Card and BC Card.

“Customers just have to open the app, scan the business’ QR code and type the amount they need to pay for goods and services,” the city government said in a statement. “Another method is for business owners to have a POS system that can scan the unique QR code of the customer, and the amount will be withdrawn from the customer’s banking account.”

Other cities including Busan and Incheon as well as the province of South Gyeongsang will join Seoul in piloting the system. Although it is starting with five mobile payment apps, more developers might get on board in the future, the Seoul government said.

For the trial run, the Seoul city government has signed agreements with 11 banks, including NH Nonghyup, BNK Busan, Shinhan, IBK, Woori, Kookmin and KEB Hana. “We will be expanding cooperation with more banks as well,” the government said.

The banks have agreed to waive transaction fees on the system, and the apps have agreed not to receive fees from businesses, the government said.

How well the app does is likely to depend on how convenient and attractive customers find it. The Seoul city government said customers who pay using the system will get a 40 percent tax refund on the total amount they spend through the system.

“Say someone earns 50 million won [$44,417] a year, and he or she uses the system to pay for about 25 million won in expenses,” the city government said. “He or she will receive around 790,000 won as tax refund. That is considerably higher than what a customer who spent 25 million that year with credit cards would get, which is around 310,000 won.”