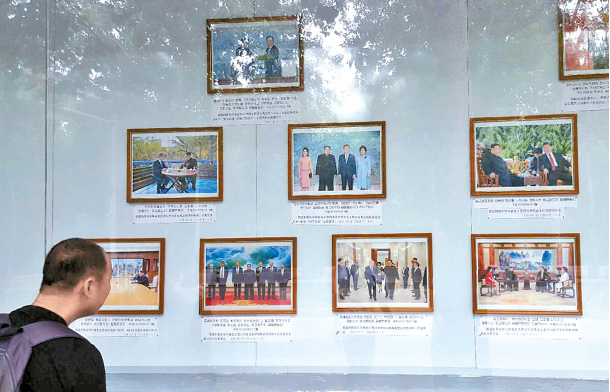 Outside the North Korean Embassy in Beijing, a bulletin board boasts of the reclusive country’s changing relationship with the United States and South Korea.

“Chairman Kim Jong-un of the Democratic People’s Republic of Korea shakes hands with U.S. President Donald J. Trump for the first time upon encounter,” reads one caption written in Korean and Chinese underneath a photo of the two leaders at their historic summit last month.

“Comrade Kim Jong-un is deepening his relationship with President Trump on a walk,” reads another caption for a photo of the two leaders strolling through a garden at the summit site in Singapore.

The photographs, which appeared on a public bulletin board outside the embassy gate on Sunday, are a marked departure from the images of missile launch tests that normally adorn this propaganda channel, a shift from bluster to diplomacy.

Along with images from the summit with Trump, the embassy also posted pictures from the April 27 and May 26 meetings between North Korea’s Kim and South Korean President Moon Jae-in.

This is the first known time that the embassy put up images of a U.S. and South Korean president. It remains to be seen how long they will remain there.

Aside from the photos of Trump and Moon, the North also put up pictures of its leader with Thomas Bach, president of the International Olympic Committee when he visited Pyongyang in March, and with Russian Foreign Minister Sergey Lavrov.

Pictures of Chinese President Xi Jinping chatting with Kim during their three summit meetings this year are also on the board, though the embassy has highlighted Kim’s past meetings with Xi before.

The embassy’s display of photographs from the Moon and Trump meetings suggests the North has expectations of improved ties with Seoul and Washington through ongoing talks about its denuclearization. In joint statements from the April 27 inter-Korean summit and June 12 North-U.S. summit, the North agreed on “complete denuclearization of the Korean Peninsula.”

In one resulting act from the Trump-Kim summit, the North on Friday repatriated the remains of U.S. soldiers killed in the 1950-53 Korean War.

The remains were flown to Osan Air Base in Pyeongtaek, Gyeonggi, from Wonsan on the eastern coast of North Korea.

In their joint statement, Trump and Kim agreed that the United States and North Korea would “commit to recovering POW/MIA remains, including the immediate repatriation of those already identified.”