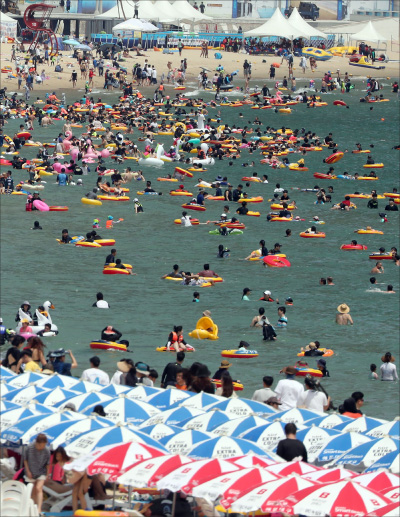 Haeundae Beach in Busan is crowded with vacationers on Sunday as a scorching heat wave continued to grip the nation. [YONHAP]

Average temperatures in Korea have been rising for the past century, according to data released Sunday by the National Institute of Meteorological Sciences, and the cause, experts say, is a mix of climate change and urbanization.

The figure is an average of temperatures throughout the year, including winter, spring, summer and fall.

“Asphalt roads and concrete buildings heat up during the day and release heat at night, rapidly bringing up the average low in Seoul,” said Byun Young-hwa, head of the climate change research department of the National Institute of Meteorological Sciences. “That also explains the increased number of tropical nights.”

Climate change is part of the problem, Byun said.

“One of the impacts of global warming was the lower amount of snow in Tibet last year compared to the usual snowfall,” he said. “As the snow there melted faster, the Eurasian continent heated up faster, and the heated air spread out widely down toward the Korean Peninsula.”

“Korea will have to brace itself for longer summers because climate change effects are bound to get worse,” he added. “The summer here may last from May to September.”

The number of Koreans getting sick or dying from the heat hit its peak this year.

The Korea Centers for Disease Control and Prevention announced on Sunday that 2,015 people fell ill from the heat between the end of May and Saturday. Another 27 people died. Among them, 894 got sick and 13 died within the past week, when the average high around the country was hovering at or above 30 degrees Celsius.

The Centers for Disease Control and Prevention said this year was the worst for heat-related deaths since it began recording figures in 2011. The second-highest was in 2016, when 17 people died.