One Belt, One Globe

One Belt, One Globe

YEH YOUNG-JUNE
The author is the Beijing bureau chief of the JoongAng Ilbo. 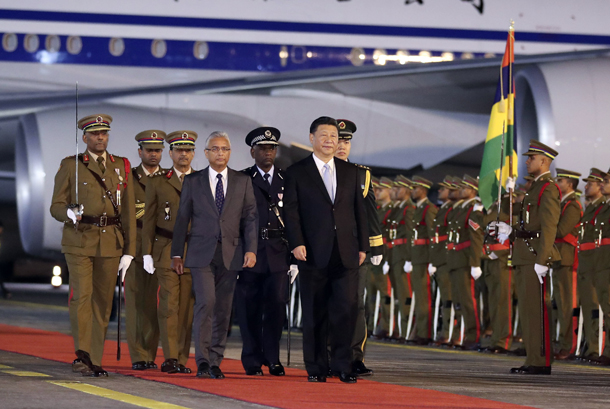 Chinese President Xi Jinping inspects the guard of honor during a welcoming ceremony in Mauritius. [XINHUA/YONHAP]

Chinese President Xi Jinping has returned to Beijing after an 11-day trip. The last stop on his five-country Middle East and Africa tour was Mauritius, a small state the size of Jeju Island with a population of 1.2 million. The leader of a country with 1.4 billion people, currently in a critical trade war with the United States, made a “friendly” visit to the small island country, with which China has few urgent issues.

It suggests how close China and Mauritius are. The first cultural center China set up abroad was established in Mauritius. The international airport of the country that highly depends on tourism was built with China’s help. Mauritius’ 25 rupee features Chinese Mauritian politician Moilin Jean Ah-Chuen, the first finance minister after independence in 1968 who led the country out of poverty.

Less than 3 percent of the population are ethnic Chinese, but the Chinese New Year is an official holiday. With the visit to Mauritius, Xi may have wanted to deliver the message to the world that once China becomes a friend, China helps to the end — whether its friend is big or small.

Valuing Africa has long been a part of China’s foreign policy, but Xi pays special attention to the continent. In six years of leadership, Xi has visited Africa four times. In September, he will host the Forum on China-Africa Cooperation (Focac) summit in Beijing, with many African leaders in attendance. At the 2006 summit, 43 heads of state made the trip.

Xi’s moves are an extension of his remark at the Central Conference on Work Relating to Foreign Affairs last month. Xi called all permanent members of the Politburo, high-level party and government officials and ambassadors and declared that he would actively lead the reform in global governance. He meant to create a new international order led by China to replace the current U.S.-oriented order.

Xi ordered specific guidelines, which include the comment, “Developing countries are natural allies in China’s international works. Let’s write a great chapter of unity and cooperation together.” The leader of China used the world “allies” in an official meeting. As if demonstrating “how to establish alliance,” he toured the African continent.

Mao Zedong dominated China by having farmers as allies, building revolutionary bases in rural areas and surrounding the cities. As I watched Xi’s Africa visit, it occurred to me that his mission to reform global governance may have already begun.