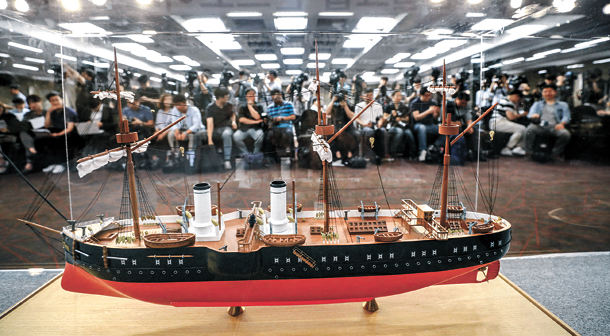 Korea is surrounded by sea. Countless ships from many powerful nations have been sunk in these waters during numerous wars.

Since there is no proof, let’s just say it’s a legend. Korea is in the perfect place — both geographically and historically — for a myth about a treasure ship. There is a tale that led to many of these myths, the “Golden Lily” operation that Japan ran in the 1930s. Imperial Japan took treasures from Asian countries to pay for the Pacific War, claims Sterling Seagrave in his book “Gold Warriors.” There are many stories about ships that sank in the sea near Korea while transporting those treasures. The Japanese forces withdrew before they could take all the treasure hidden in Korea after their defeat in the war.

The legends encouraged treasure hunters. Since the late 1990s, after the financial crisis, the search for treasure has boomed. Treasure hunters searched for the Japanese ship Chozan Maru, which sank in the waters off Gunsan in 1945. It is said to be a treasure transport ship. That’s not all. The Shima Maru, which was allegedly transporting 10 tons of gold bullion and sank near Gunsan, and Kow Shing of Qing China, which sank in the West Sea in 1894 after an attack by Japanese forces, have also been the subjects of huge searches. There were rumors that 600 tons of silver were onboard the Kow Shing.

But nobody has ever found any treasure. The wreckage of the Shima Maru and Kow Shing were found, but they did not contain treasure.
The elusive treasure ships have been used to fuel financial crimes. In the Kim Dae-jung administration, the Lee Yong-ho scandal saw the stock price of a company manipulated through a treasure ship excavation project.

Lately, the fate of armored cruiser Donskoi has stirred the country. It sank during the Russo-Japanese War in 1905. There were rumors that it carried 150 trillion-won ($133.7 billion) worth of gold coins and bullion.

Some aspects of the story were immediately suspicious — 150 trillion-won worth of gold bullion would be about 3,300 tons, more than last year’s total global production of 3,160 tons.

The Donskoi controversy has taken a turn. According to the police, a key figure has fled abroad after being involved in fraud. Financial authorities are checking whether stock prices were manipulated using the treasure ship. If speculation is proven to be true, nearly 100,000 people could suffer the damage.

Interestingly, the scandal broke as the economy is struggling, just as the previous search for treasure ships peaked right after the financial crisis. “What if the economy were thriving?” I thought. Economic recovery is needed for many reasons.