After 11 years of struggle, Choi’s time has finally come

After 11 years of struggle, Choi’s time has finally come 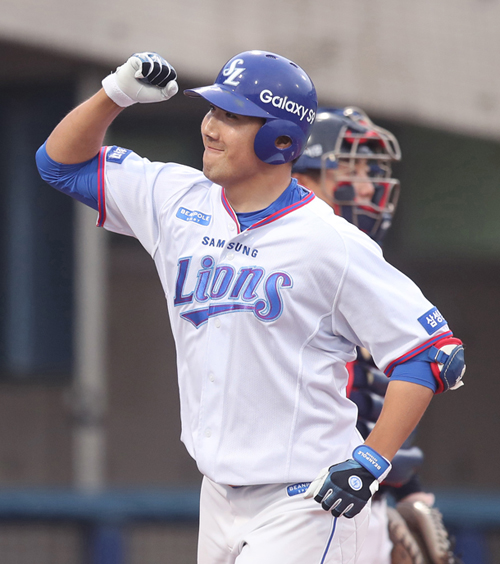 Choi Young-jin of the Samsung Lions celebrates after hitting a two-run home run during a game against the Lotte Giants on July 10. [ILGAN SPORTS]

Choi Young-jin may have started his professional baseball career with no proper contract and a tentative spot on a practice squad, but just seven years later, the 30-year-old batter has established himself as one the rising stars of the Daegu team. 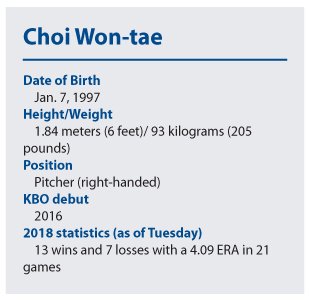 After graduating from Seorak High School in Gyeonggi, Choi attended college rather than turning professional, as he failed to get drafted by any of the KBO clubs. While attending Hanil University in North Jeolla, Choi managed to play for the school’s baseball team, but chose to focus more on his studies. Despite Choi’s shift in interest, he had better statistics in baseball than his major GPA.

“Over the four years, I was playing better baseball,” Choi said.

After graduating college, Choi once again failed to get drafted by any of the KBO teams. He managed to get a spot on the LG Twins practice squad, and one year later, at the age of 24, he was finally offered a contract with the Twins.

“I was lucky,” Choi said. “At the time when I joined [the Twins] as a developing player, Kim Ki-tai [now the Kia Tigers manger] was the manager of the Futures League team. And when he got promoted as the manager of the Twins in 2012, I got to sign an official contract.”

Choi didn’t disappoint, as he had a batting average of .241 in 43 games during his KBO rookie season.

It all went wrong the following year, when Choi failed to show any improvements, finishing with a .125 batting average in six games, leading him to be released by the Twins.

Choi was given another shot at continuing his career after he was drafted by the Doosan Bears in the second draft after the 2013 season. Since the Bears already had a solid starting lineup, Choi stayed mainly in the Futures league - playing four KBO games in 2014, one in 2015 and none in 2016.

At the end of the 2016 season, Choi asked the Bears to release him and signed a contract with the Lions.

“I cried because it was really sad to leave my teammates and coaching staff [who I’ve spent years with],” Choi said. “My baseball life wasn’t all smooth sailing.”

But signing with the Lions has definitely allowed Choi to find his stride.

During the Lions’ game against the Tigers on April 1, 2017, Choi stepped out for the first time in the Lions uniform, as a replacement for Lee Won-seok while the Lions were losing 0-7 at the top of the ninth inning. At the bottom of that inning, the Lions managed to score five runs to get behind 5-7. While the Lions were at two out with bases fully loaded, Choi stepped up to the plate for his first at-bat. He instantly went down in Lions’ history as he brought both runners home to tie the game.

This season, Choi has gotten better. During a game against the Lotte Giants on July 10 in Pohang, Choi hit a two-run home run while the Lions were losing 0-1, to take the lead.

Then against the Tigers on July 28, Choi went two-for-three at-bats and made great saves in defense to successfully lead the Lions to a win.

A day later, during another game with the Tigers, Choi hit a three-run home run against Pat Dean to quadruple the Lions’ lead. With Choi’s home run, the Lions started their scoring streak, winning 13-1.

For the first time in his career, Choi was selected as MVP and held an interview in front of the fans.

“Because I know that I’ll get another chance at bat, I feel a lot more comfortable,” Choi said.

Choi is more desperate at each and every opportunity he is given for his father. In 2015, Choi’s father was diagnosed with lung cancer and has been going through chemotherapy. Over the eight months, Choi’s father has gone through six different surgeries for different diseases other than lung cancer.

Despite the health concerns, Choi’s family tries to keep the details secret from Choi so that he can focus on baseball.

“Since my father stays in the hospital all the time, he gets really happy to see me on television,” Choi said.

As Choi is unable to visit his father as often as he used to, he tries his best in each and every game for his chance to maintain his spot in the starting lineup.

“Before, I had a goal of what kind of player I wanted to become. Now I’m just focused on today,” Choi said. “Because rather than thinking about my future, I want to try my best in each and every game.”