CHOI MIN-WOO
The author is a political news reporter of the JoongAng Ilbo. 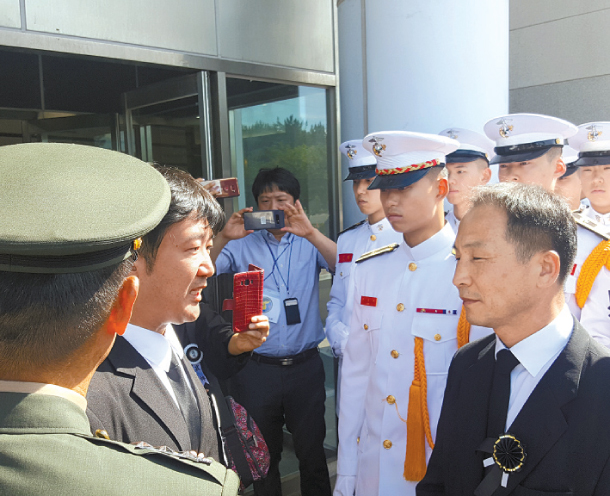 The Blue House sent a mid-level official, second from left, to the funeral of five marines killed in a chopper crash last month. [YONHAP]

Park Jeong-gi, father of late student activist Park Jong-cheol, passed away on July 28 and his memorial altar was set up in Busan. Blue House officials visited.

Presidential Secretary for Civil Affairs Cho Kuk visited on July 29. He said that Park, father of his school friend, had privately offered him plenty of advice. Cho was one year ahead of Park Jong-cheol in Hyekwang High School and Seoul National University. In the afternoon, Presidential Chief of Staff Im Jong-seok traveled to Busan. He said he had to go. President Moon Jae-in wrote on Facebook that he had seen the father getting silver hairs and wrinkles. “The father of Park Jong-cheol left profound footprints,” said Moon.

The grief of the Blue House feels quite different from when former prime minister Kim Jong-pil died a month ago. Moon was on an overseas trip. While some thought he may visit the memorial alter upon returning, he did not go. The Blue House instead sent Han Byung-do to pay condolences. A medal was awarded to Kim because he had been a prime minister.

We understand that the Blue House would not pay special tribute to the death of a rightist politician who had played a leading role in the May 16 coup. But what about the five marines who died in the Marine One helicopter crash? After the accident on July 17, Blue House spokesperson Kim Eui-kyum simply said the performance and capacity of Surion helicopter was world-class. The Blue House neglected the memorial alter for a while and sent a mid-level official to the funeral.

President Moon said in his inauguration speech that he would become the president of all people and would serve each and every citizen, even the ones who did not support him. But the Blue House doesn’t seem to be interested in the deaths of those that are not on their political side. Some say that the Blue House is selective in paying condolence visits.