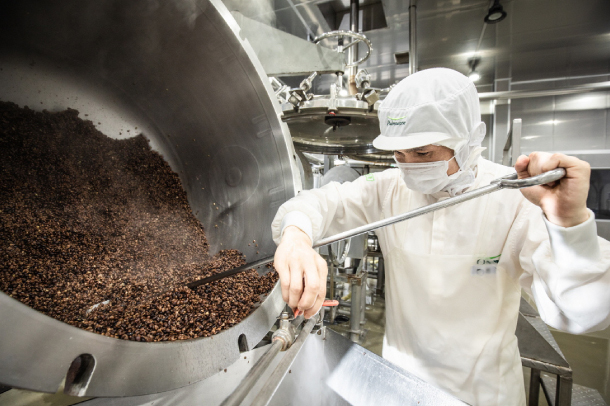 An employee at Pulmuone’s natto plant in Goesan County, Gyeonggi, moves boiled beans to the next stage of the production line, fermentation. [PULMUONE]

A growing number of Koreans are falling in love with natto, the popular Japanese fermented bean dish known for its texture and pungent smell, with the domestic market now valued at 30 billion won ($26.5 million).

The natto market, which was worth a mere 2.5 billion won in 2006, is doing so well that local food company Pulmuone has opened a new factory to exclusively produce the popular dish.

Located in Goesan County, North Chungcheong, the factory has three stories measuring 3,838 square meters (41,311 square feet) in total and can produce up to 300,000 packs of natto per day.

“The new factory is more than three times larger than our last natto facility,” the company said.

From bean fermenting to packaging, every stage of the natto production line will take place in the new factory starting from July. Raw beans will start their transformation on the third floor, descending through the building before emerging as natto on the first floor.

Pulmuone has been making natto for 12 years. Although, on a global scale, the company is new to the natto game, in Korea, it has comfortably taken the lead in the domestic market with an 81 percent share.

“Korea’s weather and temperature are different from Japan, and these are factors that greatly influence fermentation,” explained a Pulmuone spokesman. “That’s why at first we found out natto didn’t ferment here the same way that it did in Japan. We had to develop our own ways to mass ferment beans in natto style in Korea’s climate.”

Adjustments were also made to try and reduce the smell for Koreans who are often very sensitive to food odors. The company developed various sauces by adding ingredients like citron and vinegar to the original dried-bonito based soy sauce recipe frequently used in Japan.

One of the strongest reasons Koreans were attracted to the dish was its reported health benefits. In 2006, natto was selected by U.S. Health magazine as one of the world’s five healthiest foods. It is often mentioned in media as the secret behind the longevity that Japanese people are famous for.

“There’s been a steady trend in wellbeing and an increased awareness of natto’s health effects over time, which resulted in a slow but gradual increase in the local market,” said the company spokesman. “Personally, I believe a higher interest in Japanese culture also made people today more familiar with the dish itself.”

In the mid-2000s, when Pulmuone started the business, the only existing natto products on the market were those imported from Japan, mostly frozen. Local companies are able to provide refrigerated ones that can be eaten without defrosting and appear to be fresher.

Pulmuone was not the only company to spot an opportunity in the natto market. Daesang launched its first natto product in 2016 and Dongwon F&B and food conglomerate CJ CheilJedang started to roll out their own products from last year.