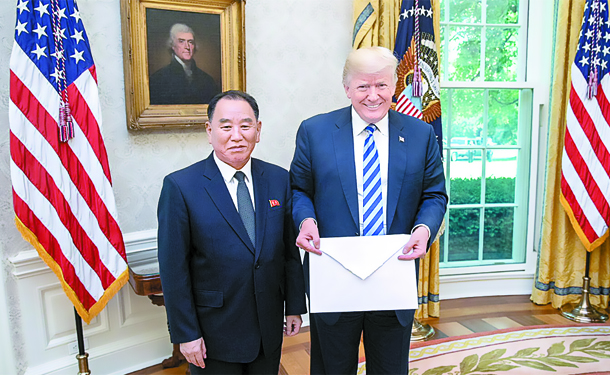 Another envelope has appeared in U.S.-North Korea summit diplomacy.

Kim Yong-chol, vice chairman of the Central Committee of the Workers’ Party of North Korea, visited the White House shortly before the Singapore summit on June 12 and delivered a letter from North Korean leader Kim Jong-un to U.S. President Donald Trump. On August 4, U.S. Ambassador to the Philippines Sung Kim gave North Korean Foreign Minister Ri Yong-ho a letter from Trump at the Asean Regional Forum (ARF) session in Singapore. Minister Ri was caught on camera opening the envelope and reading the letter.

Even in the age of light-speed communications, the analogue style letter is an effective diplomatic tool. It is the best way to show sincerity. It is especially dramatic when sent to a leader of a hostile country. Former U.S. President Barack Obama also used letters. In the Iran nuclear deal, which was later scrapped by Trump, his letters to Iran’s Supreme Leader Ali Khamenei played an important role. Former U.S. President George W. Bush sent a letter to Kim Jong-il after the February 13 nuclear agreement in 2007. North Korea refused to report its nuclear program, and the deal fell apart.

“Mr. President, we and you ought not now to pull on the ends of the rope in which you have tied the knot of war, because the more the two of us pull, the tighter that knot will be tied. And a moment may come when that knot will be tied so tight that even he who tied it will not have the strength to untie it,” Soviet Secretary General Nikita Khrushchev wrote in a letter to U.S. President John F. Kennedy on Oct. 26, 1962. The two leaders exchanged dozens of letters at the time, making efforts to prevent a nuclear war.

In a letter to Adolf Hitler a few days before the Munich Agreement on Sept. 30, 1938, British Prime Minister Neville Chamberlain wrote that the Czech government would not withdraw its military from the Sudetenland because of possible armed invasions, but he would persuade them. Chamberlain thought that peace could be guaranteed if Hitler’s demand to annex the Sudetenland was granted in the Munich Agreement.

The letter is considered a case of a failed appeasement from a leader deceived by Hitler’s peace tactic.

In most cases, letters are declassified decades later and evaluated for historical implications, but Trump released Kim’s second letter delivered by Secretary of State Mike Pompeo on Twitter, saying “Thank you for your nice letter.”

In the letter, Kim showed his anticipation for another summit and referred to Trump as “Your Excellency” without mentioning denuclearization. The third letter may have been written with public disclosure in mind.

Letters were exchanged between South and North Korean leaders as well. What will history say about these letters?