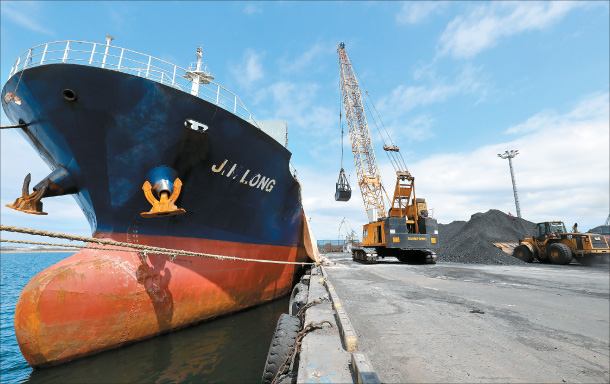 The Belize-flagged Jin Long, suspected of carrying North Korean coal from Russia to South Korea, is seen anchored in Pohang, North Gyeongsang, on Tuesday. South Korean authorities, however, said that the coal seen being unloaded from the ship was of Russian origin. [NEWS1]

Another ship suspected of carrying North Korean coal from Russia to South Korea was tracked to Pohang, North Gyeongsang, according to vessel tracking data Tuesday.

But the South Korean Ministry of Foreign Affairs quickly denied that the ship carried North Korean coal, though it confirmed it had entered South Korean waters.

The Marine Traffic data showed the Belize-registered Jin Long by the port of Pohang as of Tuesday afternoon, after it entered on Saturday a port in Nakhodka in the Russian Far East. It is expected to return to Russia this week.

Voice of America reported earlier that day that the Jin Long, suspected of smuggling in North Korean coal to the South, was in Pohang.

It further reported that, based on satellite images provided by Planet Labs, an American earth imaging company, the vessel was seen anchored adjacent to piles of a black substance suspected to be coal at a port in Nakhodka on Aug. 1.

This follows a series of reports that North Korean coal has been transshipped into the South by disguising its origins despite the UN Security Council’s comprehensive coal ban, which was implemented last August.

Government records Tuesday showed that the vessel carrying 5,100 tons of cargo, presumably coal, entered the Pohang port Saturday morning and was set to depart Wednesday afternoon. Workers were spotted unloading coal from the vessel in Pohang Tuesday but did not answer questions on where it originated from, saying they were only following orders.

The Jin Long is one of the vessels that has been mentioned as being under investigation by authorities for disguising North Korean coal as Russian. It was suspected of transferring North Korean coal last October at the port of Donghae in Gangwon. It is seen to have entered South Korean ports over 20 times since then.

Rep. Yoo Ki-june, who is in charge of a task force by the main opposition Liberty Korea Party examining the North Korean coal issue, described the Jin Long’s sketchy history in a press conference on Tuesday.

Resolution 2397, adopted by the UN Security Council last December, allows countries to seize, inspect and impound ships at ports if there is “reasonable grounds to believe” they are involved in the transport of items prohibited by sanctions, including coal through ship-to-ship transfers.

Vessels violating sanctions often change their flag state and names in order to evade authorities, and the Jin Long has changed its name twice since 2008 and its country of registry multiple times. Customs authorities searched the ship but said they found nothing suspicious.

The Foreign Ministry spokesman, however, said that the Jin Long “carried Russian coal.”

Noh Kyu-duk, spokesman of the ministry, said at a press briefing, “There has been no confirmation of any violations of Security Council resolutions in an inspection of the ship by related authorities.” He said the vessel will depart Wednesday.

On Monday, a government official in Seoul said separately that the Korea Customs Service has detected nine cases involving illegal imports of North Korean coal and had been conducting investigations of eight ships.

The investigation includes the process of illegal imports, fabrication of documents and violation of various related laws. A travel ban has been imposed on some of suspects. However, the official clarified that no banks were under investigation.