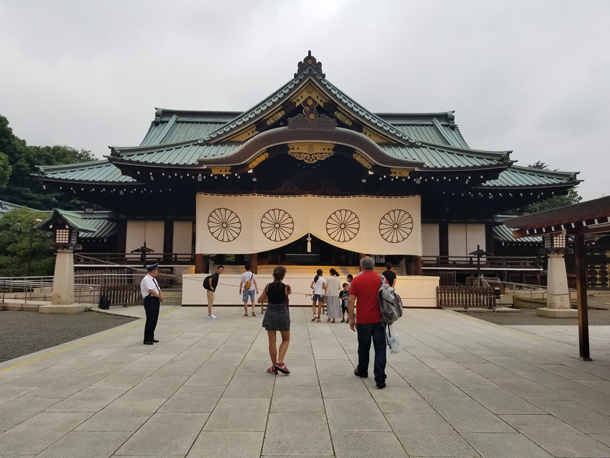 As Liberation Day approaches, there is one point that still bothers me. More than 21,000 Koreans who were forced into labor during the Japanese occupation are still enshrined at the Yasukuni Shrine in Tokyo without permission. Regardless of the will of their families, their names are enshrined together with the stone tablets of Class A war criminals, and they receive memorial services together.

The descendants have been demanding Japan take out the tablets of forced-labor victims, but the keepers of Yasukuni Shrine have refused. A number of lawsuits were brought, but the Japanese court dismissed the cases on the ground of religious freedom. There are opinions that the tablets of Class A war criminals should be taken out from the Yasukuni Shrine to make it a healthy memorial facility, but they have been constantly ignored.

I am not just angry; I am also curious. Why do they want to keep the tablets of forced-labor victims and Class A war criminals together despite the criticism and protests? Why is it so hard to remove the names of victims?

The Yasukuni Shrine claims that spirits enshrined together cannot be separated. According to Prof. Lee Jong-gak, an expert in the modern history of Korea and Japan, Japan argues that enshrined souls are like “water in a jar” and it is “impossible to separate the water of certain people.”

When I heard this, I shuddered. Emily Bronte wrote, “And give me liberty! Yes, as my swift days near their goal; ’Tis all that I implore; In life and death a chainless soul, With courage to endure.” When people leave the restrictions of reality and the human body, we wish the soul to be free and independent.

But the Korean victims at the Yasukuni Shrine were forcibly mobilized for militarism, had their souls combined with war criminals and are still forced to be worshiped to romanticize the war. It is the pinnacle of totalitarianism, arguably the most symbolic demolition of individual dignity and freedom.

Are the Japanese people on the side of totalitarianism? Just as many Japanese civil groups have joined Koreans in protest against Yasukuni enshrinement and visits, there are Japanese people who see through the problem of the Yasukuni Shrine.

I remembered a line that former Culture Minister Lee O-young, who wrote “Smaller is Better” for the Japanese, gave in an interview a few years ago. He said that the Japanese people should also celebrate Liberation Day as a day of emancipation with Koreans, as they were also freed from the militaristic government that drove many Japanese people to death with kamikaze attacks and other policies.
I hope such a festive day can come sometime.