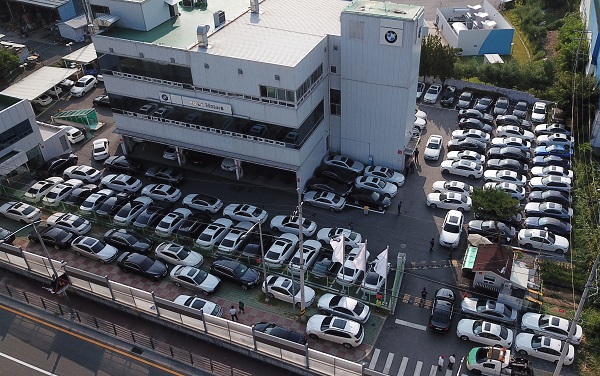 A BMW service center in Daejeon on Tuesday. [YONHAP]

The Transport Ministry banned BMW vehicles that are prone to catching on fire and haven’t been officially checked for safety from Korean roads.

The Ministry of Land, Infrastructure and Transport said that, of the 106,000 fire-prone BMW models in Korea that are subject to recalls, any that have not gotten safety inspections by Tuesday midnight will be forbidden from Korean roads -- unless they are on their way to a BMW service center for an official inspection.

As of Monday midnight, 79,000 BMW vehicles have completed the safety checkup and 5,000 were about to. That means some 22,000 cars are being banned.

“The government’s primary mission is to secure the safety of the people,” said Transport Minister Kim Hyun-mee in a statement Tuesday.
“For that reason, the ministry has requested a city mayor, a provincial governor and the head of district office to launch a suspension order on BMW’s recalled vehicles that haven’t received the safety inspection under the Automobile Management Act article No. 37,” she added.

A list of uninspected BMW vehicles will be shared with the Transport Ministry, municipal governments and police.

The police will be able to distinguish whether a BMW has been checked or not by its license plate. If an unchecked vehicle is caught driving around, the law sets a penalty of up to one year in prison or a fine of up to 10 million won ($8,860). As soon as the car is officially checked, the suspension order will be cleared and it will be taken off the banned list.

“The gist of this order is to have the owners get the safety checkup as soon as possible rather than trying to impose penalties on them,” said Kim Kyung-wook, an official at the Transport Ministry.

“If an owner neglects the government’s order and then his car catches on fire, the government is planning to actively report the owner to the police and he will be held legally responsible,” the official added.

BMW Korea said it will “do its best to take care of every one of its customers.”
It said owners of some 10,000 recalled vehicles could not be reached for various reasons and is trying to get in contact with them through diverse channels such as the Credit Finance Association and Korea Rent-A-Car Association.

BMW Korea launched a voluntary recall on July 26 of some 106,000 vehicles from 42 models after fires started to break out in its vehicles – mostly 520d models – in July. A total of 39 BMW fires broke out this year.

It insists emission gas recirculation (EGR) modules were the cause and said it will replace the EGR. The recall will begin on Aug. 20 when the necessary parts are secured.

As a temporary fix, BMW Korea started the safety checkups at its 61 service centers nationwide.