PARK HYUN-YOUNG
The author is the head of the global economic news team of the JoongAng Ilbo. 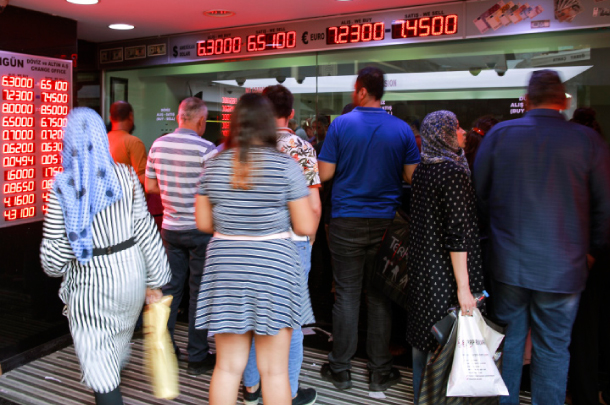 U.S. President Donald Trump’s tweets and Turkish President Recep Tayyip Erdogan’s speech caused the Turkish lira to plummet and stirred the global financial market. It was Trump that pulled the trigger. At 8:47 a.m. on Aug. 10 he tweeted, “I have just authorised a doubling of Tariffs on Steel and Aluminum with respect to Turkey as their currency, the Turkish Lira, slides rapidly downward against our very strong Dollar!” To clarify his intention, he added, “Our relations with Turkey are not good at this time!”

The value of the Turkish Lira immediately began to fall. On that day alone, it fell by 14 percent. Erdogan said in a speech that the United States was waging an economic war on Turkey. “We are aware that the issue is not the dollar, euro, gold … These are the bullets, cannon balls, missiles of an economic war waged against us.”

While the crisis is due to Turkey’s vulnerable economic structure — its external debt to GDP is over 50 percent, or as high as 70 percent according to Deutsche Bank — it was Trump that placed the last straw that broke the camel’s back.
It is the age of economic cold war. If the mid-20th century Cold War between the United States and the Soviet Union was an ideological confrontation between socialism and capitalism, countries are now waging economic wars to protect national interests. Weapons and damages now come in economic form.

Unlike during the old Cold War era, it is hard to distinguish enemies from friends. The United States was fighting against the EU before a truce last month. Already imposing tariffs on steel, the United States threatened to increase tariffs on automobiles, only to turn to negotiations at the last minute. In trade negotiations with Mexico, the United States presses to raise automobile workers’ wages. On the surface, they address the poor labor conditions, but in reality, they want to reduce the production cost gap. Washington used tariffs as a weapon against Japan as well.

The best example of the economic Cold War led by the United States is China. The critical issue that triggered an all-out war against China was the Made-in-China 2025 plan. The Chinese government plans to nurture semiconductors, aviation and robotics to fill 70 percent of the key material and part industries with Chinese products by 2025. It plans to become technologically independent. It also means that jobs and profit in the United States will decrease or disappear. While the United States has a large trade deficit with China, it is also China that buys advanced American technology the most. China is the biggest customer of Boeing.

The arms race of the original Cold War also applies to the economic cold war. It is a race for innovation. It is a fight to keep, or take, global leadership in advanced technologies. As the arms race accelerates, science and technology development and space exploration become possible. The race of innovation will also boost the advanced technology and industrial capacities of the United States and China. It may help mankind, but it is hard for Korea. While Korea is working on income-driven growth, the global economy is changing.