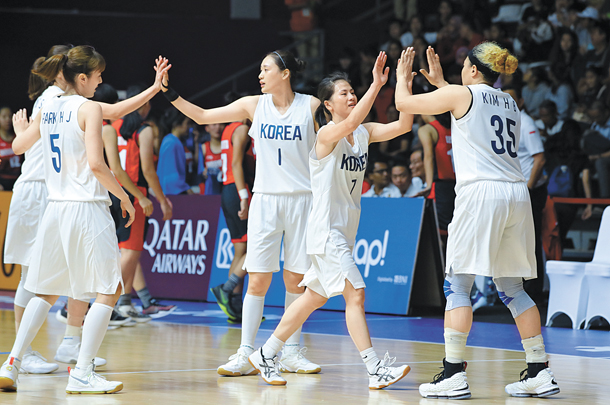 The unified Korean women’s basketball team routed Indonesia 108-40 in its first preliminary match at the 18th Asian Games on Wednesday.

Ro Suk-yong, one of three North Koreans on the team, filled the stats sheet with a game-high 22 points, eight rebounds, five assists and four steals in Group X action at GBK Basketball Hall. All 11 players on the unified team saw action in the lopsided win.

The opening ceremony of the Asian Games is tomorrow in Jakarta, but preliminary games in basketball, football and handball are already under way to accommodate their long tournament schedules.

South Korea is the defending champion, while North Korea has never won an Asian Games medal.

The joint team is currently made up of eight South Koreans and three North Koreans. One South Korean player, Park Ji-su of the Las Vegas Aces in the Women’s National Basketball Association (WNBA), has been named to the squad but has yet to report to Jakarta.

Korea finished the opening quarter up 25-8 and outscored Indonesia 33-12 in the second quarter to take a huge lead into the second half.

It was 79-29 for Korea during the third quarter, and the team reached the century mark in points with Park Ha-na’s layup with 2:32 remaining in the fourth quarter.

Lee Moon-kyu, the South Korean-born head coach of the unified team, said it was “an honor” to lead the Koreas to their first combined victory.

“We are off to a positive start, and hopefully we’ll get a good result at the end,” Lee said. “I just told them to do whatever they wanted to do, whether it was to play one-on-one defense or to get on fast breaks on offense.”