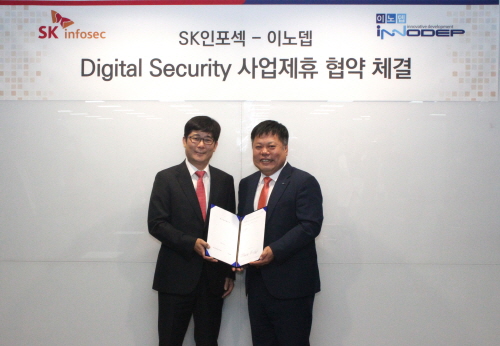 Earlier this year, SK Infosec declared ‘Digital Security’ as the next growth strategy. Digital security means that the protection target is infinitely expanded against various threats in the era of ‘Digital Transformation’, in which the boundaries between industries collapse. Therefore, SK Infosec set a goal to prepare integrated threat respond system that covers physical security, Internet of Things (IoT), industrial security and information security.

Among the physical security industries, the first step for SK Infosec is to hurry to secure video surveillance technology that is widely used in public and industrial sectors. In cooperation with Innodep, who has the original technology for video surveillance platform, SK Infosec plans to implement the Innodep’s technology into their information security control platform ‘Secudium’ to provide services in phases.

Both companies are recognized as having the highest level of technology and know-how in their fields, and this cooperation is expected to open up an era of digital security against threats to both information and physical security markets.

Both companies will complete the development of the integrated security control platform by the first half of next year and start a complete service. To this end, SK Infosec is responsible for planning, designing and operating services while Innodep is responsible for developing and providing maintenance of video surveillance software linked to the platform. Sales and marketing will go hand in hand to create new demands in each market.

SK Infosec officials said that the cooperation will trigger a creation of new markets for information security and physical security markets. It will be an effective means to monitor the internal information leakage by observing the behavior of unauthorized individuals and by confirming identification through video surveillance and system access history in network comprehensibly. It is also expected to block hacking threats to the growing number of video security devices.

Mr. Lee, CEO of Innodep, said, “Through the strategic alliance with SK Infosec, our video surveillance platform will become a new paradigm in the industry combined with various services based on the cloud.” “The result of cooperation will be a new standard for digital security that will lead the industry.”

“The convergence of information security and physical security is becoming a concrete service model for both in Korea and in the global market,” said Mr. Ahn, CEO of SK Infosec. “With this cooperation, we will set a new milestone in the industry by comprehensively corresponding to all threats towards public and industrial sectors.”